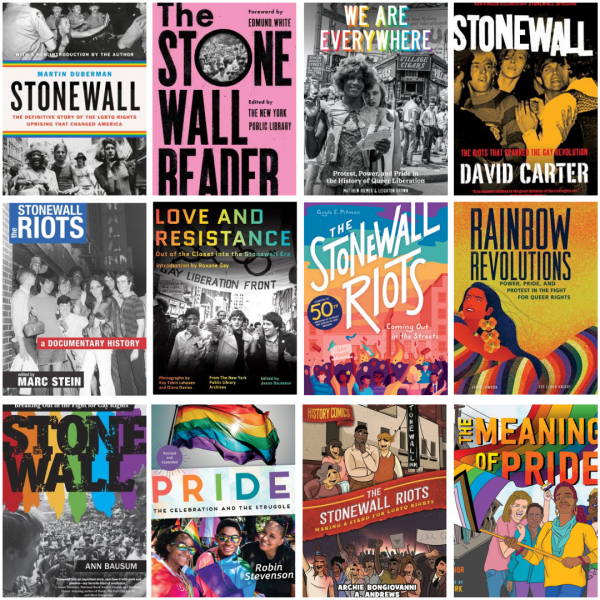 Today is the fifty-third anniversary of the Stonewall riots.

The riots at the Stonewall Inn helped shift the modern LGBTQ rights movements from a primarily assimilationist strategy to a more diverse set of strategies, including identity politics and gay pride, and anti-assimilationist ideas about queer liberation. The modern story of the LGBTQ rights movement began before Stonewall, and has ebbed and flowed in its radicalism, its assimilationism, its diversity of strategies and viewpoints ever since, but what Stonewall offered was a flashpoint--an unforgettable moment of rage and rebellion boiling over in such a way that finally could not be ignored. Stonewall was primarily a rebellion against police brutality, illegal targeting, and violent oppression. As we find ourselves in the midst of another rebellion against police brutality and violent oppression, we have a duty to one another as queer and trans people of all races and all genders to be very clear about that part of our collective history and to use our legacy as people who have, until very recently, lived and loved wholly outside the protection of the traditional laws of this country as a force for radical reinvention, powerful community building, and searing resistance.

Our legacies as queer and trans people are joyful, colorful, sardonic, campy, brave, vulnerable, pretty, messy, ugly, tough, resilient, silly, catty, brilliant, angry, freaky, beautiful, holy, human, and proud. We are being called now to employ all of our histories, all of our legacies, all of our strategies, in the service of helping all people get free. There is no rainbow flag large enough to cover the shame of those who would witness the uprisings for Black lives and call for more police. Throughout the United States, but especially here in the South, trans kids and teens are demonstratively less safe than they were ten years ago. From laws criminalizing equal access to affirming health care and education, to legislatures banning books with LGBTQ+ content, and preventing discussion of LGBTQ+ topics in classrooms, our greater cultural visibility has not equaled greater freedom, safety, or power for the majority of LGBTQ+ people. Now is the time to remember that history is not a straight line towards progress, it’s often a cycle of gains and losses. If we do not study the resilience of our queer and trans elders and anscestors, we cannot hope to overcome the challenges of bigotry and oppression we face today.

Because the story of Stonewall is as diverse and complicated as the people who were present those nights in June 1969, we cannot recommend one single book or history about Stonewall. This list includes wonderful entry points to our LGBTQ history for people of all ages.

Stonewall: The Definitive Story of the LGBTQ Rights Uprising that Changed America (Paperback)

The definitive account of the Stonewall Riots, the first gay rights march, and the LGBTQ activists at the center of the movement.

“Martin Duberman is a national treasure.”—Masha Gessen, The New Yorker

For the fiftieth anniversary of the Stonewall uprising, an anthology chronicling the tumultuous fight for LGBTQ rights in the 1960s and the activists who spearheaded it, with a foreword by Edmund White.

Finalist for the Randy Shilts Award for Gay Nonfiction, presented by The Publishing Triangle
Tor.com, Best Books of 2019 (So Far)

We Are Everywhere: Protest, Power, and Pride in the History of Queer Liberation (Hardcover)

Have pride in history. A rich and sweeping photographic history of the Queer Liberation Movement, from the creators and curators of the massively popular Instagram account LGBT History.

Stonewall: The Riots That Sparked the Gay Revolution (Paperback)

On the occasion of its fiftieth anniversary, the most important moment in LGBTQ history--depicted by the people who influenced, recorded, and reacted to it.

Love and Resistance: Out of the Closet into the Stonewall Era (Hardcover)

More than one hundred vivid photographs of the LGBTQ revolution—and its public and intimate moments in the 1960s and 70s—that lit a fire still burning today.

The Stonewall Riots: Coming Out in the Streets (Hardcover)

This book is about the Stonewall Riots, a series of spontaneous, often violent demonstrations by members of the gay (LGBTQ+) community in reaction to a police raid that took place in the early morning hours of June 28, 1969, at the Stonewall Inn in the Greenwich Village neighborhood of Manhattan, New York City. The Riots are attributed as the spark that ignited the LGBTQ+ movement.

Rainbow Revolutions: Power, Pride, and Protest in the Fight for Queer Rights (Hardcover)

A book about the fight for queer rights, beautifully illustrated with bold and beautiful illustrations by pop artist Eve Lloyd Knight.

Around one o’clock in the morning on June 28, 1969, police raided the Stonewall Inn, a gay bar in New York, sparking days of intense rioting.

Stonewall: Breaking Out in the Fight for Gay Rights (Paperback)

That’s the Stonewall.
The Stonewall Inn.
Pay attention.
History walks through that door.

Pride: The Celebration and the Struggle (Paperback)

★ "An indispensable and celebratory primer on the ongoing fight for LGBTQ+ rights. An excellent resource that is as thorough as it is visually appealing." --School Library Journal, starred review

By Archie Bongiovanni, A. Andrews (Illustrator)
$12.99

Turn back the clock with History Comics! In this graphic novel, experience the Stonewall Riots firsthand and meet iconic activists like Marsha P. Johnson and Sylvia Rivera.

The Meaning of Pride (Hardcover)

A vibrant ode to the culture and achievements of the LGBTQ+ community, The Meaning of Pride, written by Rosiee Thor and illustrated by Sam Kirk, celebrates the beauty, significance, and many dimensions of the concept of Pride as celebrated by millions of people around the world!

Every year in June, we celebrate Pride! But what does Pride mean?

Twas the Night Before Pride (Hardcover)

A glittering celebration of queer families puts Pride gently in perspective—honoring those in the LGBTQ+ community who fought against injustice and inequality.

A is for Acceptance! B is for Belonging! C is for Celebrate!

ABC Pride introduces young readers to the alphabet through the colourful world of Pride.

The Deviant's War: The Homosexual vs. the United States of America (Paperback)

The ultimate visual chronicle of life in New York's gay community circa 1970, by the incomparable Fred McDarrah, released in time for the 50th anniversary of the Stonewall rebellion and World Pride Day in June 2019.

A Queer History of the United States (REVISIONING HISTORY #1) (Paperback)

Winner of a 2012 Stonewall Book Award in nonfiction

The first book to cover the entirety of lesbian, gay, bisexual, and transgender history, from pre-1492 to the present.

The Gay Revolution: The Story of the Struggle (Paperback)

“This is the history of the gay and lesbian movement that we’ve been waiting for.” —The Washington Post

The sweeping story of the struggle for gay and lesbian rights—based on amazing interviews with politicians, military figures, and members of the entire LGBT community who face these challenges every day.

The fight for gay and les

Out of the Closets: Voices of Gay Liberation (Paperback)

Filled with Joyous self-affirmation, angry manifestos, and searching personal reflections, this classic work provides a close look at the individuals and ideologies of this important social movement.

Sex Workers Unite: A History of the Movement from Stonewall to SlutWalk (Paperback)

A provocative history that reveals how sex workers have been at the vanguard of social justice movements for the past fifty years while building a movement of their own that challenges our ideas about labor, sexuality, feminism, and freedom

Different Daughters: A History of the Daughters of Bilitis and the Rise of the Lesbian Rights Movement (Paperback)

The Trouble with Harry Hay (Paperback)

Smash the Church, Smash the State!: The Early Years of Gay Liberation (Paperback)

This anthology by former members of the Gay Liberation Front (GLF) captures the history and spirit of the revolutionary time just after Stonewall, when thousands came out of the closet to claim their sexuality, and when queer resistance coalesced into a turbulent, joyous liberation movement--one whose lasting influence would ultimately inform and profoundly shape the LGBT community of today.

Queer history didn’t start with Stonewall. This book explores how LGBTQ people have always been a part of our national identity, contributing to the country and culture for over 400 years.

Stonewall: A Building. An Uprising. A Revolution (Hardcover)

Celebrate Pride every day with the very first picture book to tell of its historic and inspiring role in the gay civil rights movement, from the author of the acclaimed Pride: The Story of Harvey Milk and the Rainbow Flag.

A must-have primer for young readers and a great gift for pride events and throughout the year, beautiful colors all together make a rainbow in Rainbow: A First Book of Pride.

Our Rainbow (Board book)

In this beautiful, bold board book, children will learn about the colors of the iconic pride flag!

Red, orange, yellow, green, blue, purple, black, and brown . . .
These are the colors of our rainbow flag. Do you know what they stand for?

Every young child is enchanted by the beautiful colors of the rainbow.

Celebrate and march along in the Pride Parade with this lively counting board book!

Teach your little ones about the Pride Parade with this colorful, energetic counting book!

★" A] sheer delight and will be a welcome addition to shelves everywhere. Highly--and proudly--recommended." --Kirkus Reviews, starred review

★ "This engaging introduction to Pride parades for the youngest readers successfully testifies to the warmth and power of queer community." --Publishers Weekly, starred review

This Day in June (Hardcover)

Marsha wants to celebrate her birthday at the one place she and her friends can be themselves: the Stonewall Inn. When the police show up and arrest people for being there, Marsha and Sylvia know this isn't right and decide to do something. Soon five hundred-- no, a thousand others join in. Together they stand up for what is right and start a movement that continues to this day.

Sylvia and Marsha Start a Revolution!: The Story of the Trans Women of Color Who Made LGBTQ+ History (Hardcover)

Someday girls like us will be able to wear whatever we want. People will call us by the names we choose. They'll respect that we are women. The cops will leave us alone and no one will go hungry.

Sylvia and Marsha are closer than sisters. They are kind and brave and not afraid to speak their truth, even when it makes other people angry.

One of Time Out's “LGBTQ+ books for kids to read during Pride Month,” this groundbreaking, pop-culture-infused illustrated biography collection takes readers on an eye-opening journey through the lives of fifty influential queer figures who have made a mark on every century of hu

‹ Sex/Sexuality up There is no such thing as a natural disaster: a climate justice and just transition reading list ›