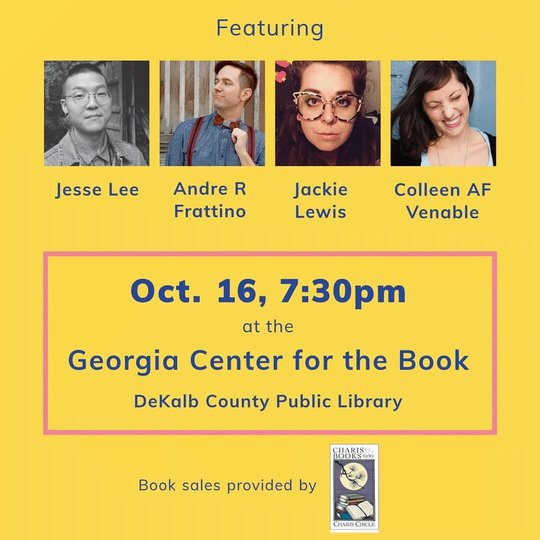 YATL is a zany live talk show for readers and writers of Young Adult Literature, hosted by author, photographer, and writer, Vania Stoyanova. Featuring games, interviews and lip-synching, the shenanigan-filled show celebrates Georgia-based, bestselling authors and exposes readers to the diverse voices in Young Adult Literature. This month’s event features Andre R. Frattino, Jesse Lee, and Colleen AF Venable. Doors open at 6:30. Event is free and open to the public. Books will be available to purchase from Charis and have signed.

Andre Frattino is a professional illustrator and storyteller, having worked in a variety of mediums, from published graphic novelist to ghost tour guide to reality television and podcast personality. He currently holds degrees from both Savannah College of Art and Design (BFA Sequential Art) and the University of Florida (MA Art Education). As a Visual Storyteller, he utilizes his skills in both writing and illustrating to work on a variety of projects, both personal and commercial. He is the creator of the Florida-focused graphic novel series, The Flagler's Few, (published through Pineapple Press) and has worked with clients including the New York Times Bestselling author Shelley Fraser Mickle, Infinite Energy, and Firehouse Subs. His recent titles include the Kickstarter-success Simon Says where he served as writer, and his illustrative adaptation of A Land Remembered, a Pulitzer Prize nominated novel. Andre currently resides in Savannah, Georgia, with his amazingly talented wife, two furry rascals and a school of koi fish. He moonlights as a walking ghost tour guide in his free time.

Jesse Lee is a comic book artist and illustrator based in Savannah, GA. He's currently working as the artist for the Image comic Simon Says alongside writer, Andre Frattino. Aside from drawing, he enjoys sipping on a good cup of coffee and espresso.

Jackie Lewis is a comic book creator from Atlanta. Growing up, she spent most of her time drawing monsters and building forts in the woods. Now, she's thrilled that she gets to draw both of those things professionally. Jackie's published works include Merry Men, The Lion of Rora, and Play Ball.

Colleen AF Venable grew up in the trees of Walden, New York….well, not very high up the trees, since she always got scared, but she did carve her name in a lot of low hanging boughs. She had an older sister, a dog, a cat, a million fish, and an imaginary pet hamster named, yup you guessed it, Hamisher. Why have an imaginary friend when you can have an imaginary friend that can fit in your pocket! She went to Wagner College and double majored in English and Studio Art, winning the award of “biggest dork” (aka first in my class) and writing plays which went on to be produced Off-Off-Broadway. Her whole life she always loved reading comics—Calvin and Hobbes, The Far Side, and she wore out my copy of the Muppets: Short, Green and Handsome—but it wasn’t until she started to get into webcomics that she also fell in love with the idea of writing comics. Now her day job is designing graphic novels for First Second Books and her night job is writing graphic novels about a not-so-imaginary-anymore hyperactive hamster named Hamisher. She loves it more than she loves having feet and she really does love having feet. They keep her shoes on. She currently lives in Brooklyn, NY, with her four ridiculously old fish (12 years old and counting!) including Emilio-the-almost-an-eel-io. Her graphic novel series Guinea Pig, Pet Shop Private Eye (illustrated by Stephanie Yue) was nominated for an Eisner for Best Publication for Kids and awarded "Best Book" recognition from Kirkus Reviews, NYPL, Bank Street, and the Junior Library Guild.

It's Robin Hood like you've never seen him before, based on scholarly and historical speculation about what's really behind the outlaw's legend.

13th century England. Robert Godwinson, former lover of King Richard, lives with his band of Merry Men in Sherwood Forest, away from the watchful eye of Prince John, who has outlawed homosexuality.