Writing Home Across the Diaspora: Priyanka Champaneri and Rajiv Mohabir 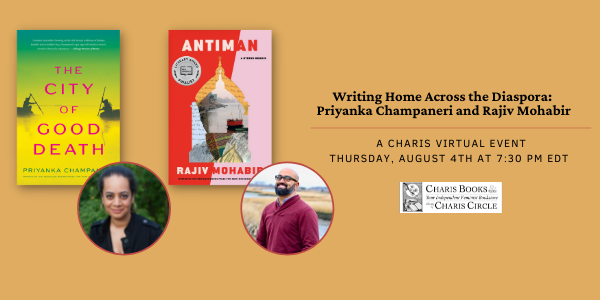 Charis welcomes Priyanka Champaneri and Rajiv Mohabir in conversation to celebrate the paperback releases of their books, The City of Good Death (Champaneri) and Antiman: A Hybrid Memoir (Mohabir). Priyanka Champaneri's transcendent, prize-winning debut novel brings us inside India's holy city of Banaras, where the manager of a death hostel shepherds the dying who seek the release of a good death, while his own past refuses to let him go. Winner of the Restless Books Prize for New Immigrant Writing, Rajiv Mohabir's Antiman is an impassioned, genre-blending memoir that navigates the fraught constellations of race, sexuality, and cultural heritage that have shaped his experiences as an Indo-Guyanese queer poet and immigrant to the United States.

The City of Good Death

As the dutiful manager of a death hostel in Banaras on the banks of the Ganges, Pramesh Prasad administers to dying Hindu pilgrims who hope to be released from earthly reincarnation. He lives and works contentedly with his wife, Shobha, their young daughter, Rani, the hostel priests, his hapless but winning assistant Mohan, and the constant flow of families with their dying kin. But one day the past arrives in the form of a body pulled from the river--a man with an uncanny resemblance to Pramesh.

Called "twins" in their childhood village, he and his cousin Sagar are inseparable until Pramesh leaves to see the outside world and Sagar stays to tend the land. After Pramesh marries Shobha, defying his family's wishes, a rift opens between the cousins that he has willed himself to forget. Yet for Shobha, Sagar's reemergence casts a shadow over the life she's built for her family. Soon, an unwelcome guest takes up residence in the death hostel, the dying mysteriously continue to live, and Pramesh is forced to confront his own ideas about death, rebirth, and redemption.

Told in lush, vivid detail and with an unforgettable cast of characters, The City of Good Death is a remarkable debut novel of family and love, memory and ritual, and the ways in which we honor the living and the dead.

Growing up a Guyanese Indian immigrant in Central Florida, Rajiv Mohabir is fascinated by his family's abandoned Hindu history and the legacy of his ancestors, who were indentured laborers on British sugarcane plantations. In Toronto he sits at the feet of Aji, his grandmother, listening to her stories and songs in her Caribbean Bhojpuri. By now Aji's eleven children have immigrated to North America and busied themselves with ascension, Christianity, and the erasure of their heritage and Caribbean accents. But Rajiv wants to know more: where did he come from, and why does he feel so out of place?

Embarking on a journey of discovery, he lives for a year in Varanasi, on the banks of the Ganges, perfecting his Hindi and Bhojpuri and tracing the lineage of his Aji's music. Returning to Florida, the cognitive dissonance of confederate flags, Islamophobia, and his father's disapproval sends him to New York, where finds community among like-minded brown activists, work as an ESL teacher, and intoxication in the queer nightlife scene. But even in the South Asian paradise of Jackson Heights, Rajiv feels like an outsider: "Coolie" rather than Desi. And then the final hammer of estrangement falls when his cousin outs him as an "antiman"--a Caribbean slur for men who love men--and his father and aunts disown him.

But Aji has taught Rajiv resilience. Emerging from the chrysalis of his ancestral poetics into a new life, he embraces his identity as a poet and reclaims his status as an antiman--forging a new way of being entirely his own. Rapturous, inventive, and devastating in its critique of our own failures of inclusion, Antiman is a hybrid memoir that helps us see ourselves and relationships anew, and announces an exciting new talent in Rajiv Mohabir.

Priyanka Champaneri received her MFA in creative writing from George Mason University and has been a fellow at the Virginia Center for the Creative Arts numerous times. Her debut novel, The City of Good Death, won the 2018 Restless Books Prize for New Immigrant Writing and was recently shortlisted for the 2021 Center for Fiction First Novel Prize.

Rajiv Mohabir is the author of Cutlish, finalist for the 2022 National Book Critics Circle Award and longlisted for the 2022 PEN/Voelcker Awar), The Cowherd’s Son, winner of the 2015 Kundiman Prize, and The Taxidermist’s Cut, winner of the Four Way Books Intro to Poetry Prize and finalist for the Lambda Literary Award for Gay Poetry in 2017. Currently he is an assistant professor of poetry in the MFA program at Emerson College. His debut memoir, Antiman, won the 2019 Restless Books Prize for New Immigrant Writing.

Please contact us at info@chariscircle.org or 404-524-0304 if you would like ASL interpretation at this event. If you would like to watch the event with live AI captions, you may do so by watching it in Google Chrome and enabling captions: Instructions here. If you have other accessibility needs or if you are someone who has skills in making digital events more accessible please don't hesitate to reach out to info@chariscircle.org. We are actively learning the best practices for this technology and we welcome your feedback as we begin this new way of connecting across distances.

The City of Good Death (Paperback)

Winner of the Restless Books Prize for New Immigrant Writing

Shortlisted for the Center for Fiction First Novel Prize

In Cutlish, a title referencing the rural recasting of the cutlass or machete, Rajiv Mohabir creates a form migrated from Caribbean chutney music in order to verse the precarity of a queer Indo-Caribbean speaker in the newest context of the United States.

Poetry. LGBTQIA Studies. Winner of the Kundiman Poetry Prize. Rajiv Mohabir uses his queer and mixed- caste identities as grace notes to charm alienation into silence. Mohabir's inheritance of myths, folk tales, and multilingual translations make a palimpsest of histories that bleed into one another.

The Taxidermist’s Cut is a collection that centers the pressures of being a queer brown youth awakening sexually in a racist, anti-immigrant matrix.

Thunder in the Courtyard (Paperback)