The Whiteness of Wealth: Dorothy A. Brown in conversation with Maurice J. Hobson 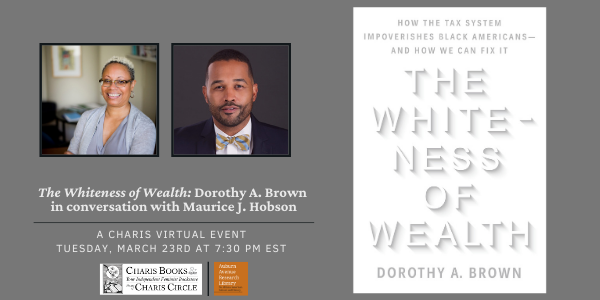 Charis welcomes Dorothy A. Brown in conversation with Maurice J. Hobson for a celebration of The Whiteness of Wealth: How the Tax System Impoverishes Black Americans--and How We Can Fix It. A groundbreaking exposé of racism in the American taxation system from a law professor and expert on tax policy. This event is co-sponsored by the Auburn Avenue Research Library on African American Culture and History.

“Important reading for those who want to understand how inequality is built into the bedrock of American society, and what a more equitable future might look like.”—Ibram X. Kendi, #1 New York Times bestselling author of How to Be an Antiracist

Dorothy A. Brown became a tax lawyer to get away from race. As a young black girl growing up in the South Bronx, she’d seen how racism limited the lives of her family and neighbors. Her law school classes offered a refreshing contrast: Tax law was about numbers, and the only color that mattered was green. But when Brown sat down to prepare tax returns for her parents, she found something strange: James and Dottie Brown, a plumber and a nurse, seemed to be paying an unusually high percentage of their income in taxes. When Brown became a law professor, she set out to understand why.

In The Whiteness of Wealth, Brown draws on decades of cross-disciplinary research to show that tax law isn’t as color-blind as she’d once believed. She takes us into her adopted city of Atlanta, introducing us to families across the economic spectrum whose stories demonstrate how American tax law rewards the preferences and practices of white people while pushing black people further behind. From attending college to getting married to buying a home, black Americans find themselves at a financial disadvantage compared to their white peers. The results are an ever-increasing wealth gap and more black families shut out of the American dream.

Solving the problem will require a wholesale rethinking of America’s tax code. But it will also require both black and white Americans to make different choices. This urgent, actionable book points the way forward.

Dorothy A. Brown is an Asa Griggs Candler Professor at Emory University School of Law. A graduate of Fordham University and Georgetown Law, she received her LLM in Taxation from New York University. A nationally recognized scholar in the areas of race, class, and tax policy, she has published dozens of articles, essays, and book chapters on the topic. She has appeared on CNN, MSNBC, PBS, and NPR, and her opinion pieces have been published in CNN Opinion, Forbes, The New York Times, and The Washington Post. Born and raised in the South Bronx in New York City, Dorothy Brown currently resides in Atlanta, Georgia.

Maurice J. Hobson uses his love of history to strategically analyze some of the topics truest to his upbringing and livelihood. As a scholar, professor and prominent American South historian, he presents his chronicles with an experiential and academically-honed perspective on the national and international implications surrounding topics of electoral politics, race and the black new South.

Hobson's practiced lens applies modern perspective to historical themes he has long studied and identified in phenomena such as Olympification.  His unexampled contributions to the discussion on current state of the American South, has led to work in consulting, speaking and his latest book, The Legend of the Black Mecca: Politics and Class in the Making of Modern Atlanta.

The Whiteness of Wealth: How the Tax System Impoverishes Black Americans--and How We Can Fix It (Hardcover)

The Legend of the Black Mecca: Politics and Class in the Making of Modern Atlanta (Paperback)

For more than a century, the city of Atlanta has been associated with black achievement in education, business, politics, media, and music, earning it the nickname the black Mecca.

Event Summary:
Charis welcomes Dorothy A. Brown in conversation with Maurice J. Hobson for a celebration of The Whiteness of Wealth: How the Tax System Impoverishes Black Americans--and How We Can Fix It. This event is co-sponsored by the Auburn Avenue Research Library.