Victoria Law, author of "Prisons Make Us Safer": And 20 Other Myths About Mass Incarceration, and Sarah Mirk, author of Guantanamo Voices: True Accounts from the World’s Most Infamous Prison 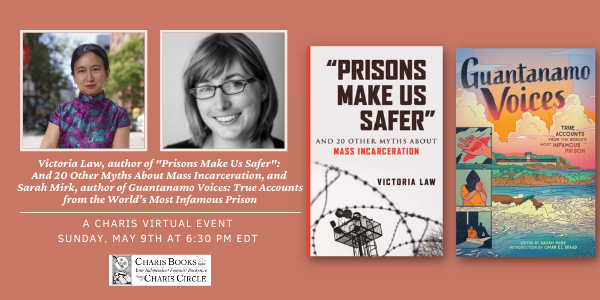 Charis welcomes Victoria Law in conversation with Sarah Mirk for a unique perspective on the issue of mass incarceration, one that considers those who are often invisible or forgotten in our discussions of mass incarceration. "Prisons Make Us Safer": And 20 Other Myths About Mass Incarceration is an accessible guide for activists, educators, and all who are interested in understanding how the prison system oppresses communities and harms individuals. Guantanamo Voices: True Accounts from the World’s Most Infamous Prison is an anthology of illustrated narratives about the prison and the lives it changed forever. This event takes place on crowdcast, Charis' virtual event platform. Register here.

Victoria Law has been researching and writing about incarceration, gender, and resistance since 2000. She is the author of Resistance Behind Bars and the coauthor of Prison By Any Other Name. Law has written about prisons and other forms of confinement for outlets including the New York Times, The Nation, Wired, and Bloomberg Businessweek. She is a co-founder of Books Through Bars–NYC and the longtime editor of the zine Tenacious: Art and Writings by Women in Prison. Connect with her at victorialaw.net or on Twitter @LVikkiml.

Journalist Victoria Law explains how racism and social control were the catalysts for mass incarceration and have continued to be its driving force: from the post-Civil War laws that states passed to imprison former slaves, to the laws passed under the “War Against Drugs” campaign that disproportionately imprisons Black people. She breaks down these complicated issues into four main parts:

“Prisons Make Us Safer” is a necessary guide for all who are interested in learning about the cause and rise of mass incarceration and how we can dismantle it.

Sarah Mirk is a graphic journalist, editor, and teacher. She is the author of Guantanamo Voices (Abrams, 2020), an illustrated oral history of Guantanamo Bay prison, which Kirkus called “extraordinary… an eye-opening, damning indictment of one of America’s worst trespasses.” She is also a zine-maker and illustrator whose comics have been featured in The Nib, The New Yorker, Bitch, and NPR.

In January 2002, the United States sent a group of Muslim men they suspected of terrorism to a prison in Guantánamo Bay. They were the first of roughly 780 prisoners who would be held there—and 40 inmates still remain. Eighteen years later, very few of them have been ever charged with a crime. In Guantánamo Voices, journalist Sarah Mirk and her team of diverse, talented graphic novel artists tell the stories of ten people whose lives have been shaped and affected by the prison, including former prisoners, lawyers, social workers, and service members. This collection of illustrated interviews explores the history of Guantánamo and the world post-9/11, presenting this complicated partisan issue through a new lens.

“Prisons Make Us Safer”: And 20 Other Myths about Mass Incarceration (Myths Made in America) (Paperback)

An accessible guide for activists, educators, and all who are interested in understanding how the prison system oppresses communities and harms individuals.

Prison by Any Other Name: The Harmful Consequences of Popular Reforms (Hardcover)

But what does it mean--really--to celebrate reforms that convert your home into your prison?
--Michelle Alexander, from the foreword

In January 2002, the United States sent a group of Muslim men they suspected of terrorism to a prison in Guantánamo Bay. They were the first of roughly 780 prisoners who would be held there—and 40 inmates still remain.