The Universal Guide to Running for Office: Park Cannon in conversation with Michelle Bennett 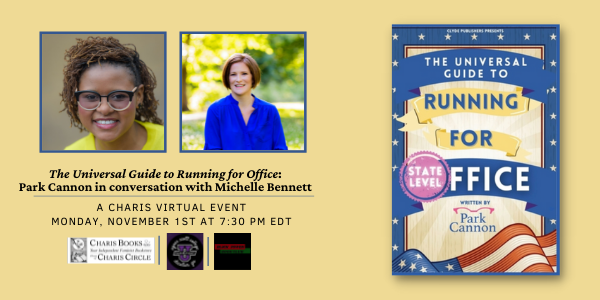 Charis welcomes Park Cannon in conversation with Michelle Bennett for a discussion of The Universal Guide to Running for Office. Become the leader you were destined to be and learn from state elected official, Park Cannon, in The Universal Guide to Running for Office. This event is co-hosted by Agnes Scott College Fair Fight U and Agnes Scott College Black Power Book Club. ASC Fair Fight U educates fellow Scotties about elections and voting rights, as well as bringing awareness to election reform and voter suppression. ASC Black Power Book Club is a social organization that stands on the belief that knowledge is power. By encouraging innovative thoughts and discussions around Black culture and history invoked through literary and media works, we charge marginalized intellectuals with the mission of reclaiming their right to the power of knowledge.

Park Cannon is a tried and true winner across Georgia, and she looks forward to helping you find success through service.

She currently serves as the Secretary to the Georgia House Democratic Caucus, and is assigned to the Insurance, Small Business Development, Human Relations & Aging, Code Revision and Ethics committees. Her legislative efforts focus on reproductive justice issues such as access to quality health care, housing, and education. Rep. Cannon seeks to stop the erosion of affordability for basic needs, which she believes are the foundations of social stability. She also devotes her legislative work to protecting Georgia’s most vulnerable citizens: women and children, the elderly and the LGBTQ+ community. These communities are often the most at risk for losing their homes and access to quality health care.

During previous legislative sessions, Rep. Cannon centered her efforts legislation that addresses maternal mortality rates and the HIV epidemic in Georgia. Rep. Cannon has partnered with some very brave and upstanding members of the state legislature from all corners of Georgia to ensure access to the HIV-preventive treatment, PrEP, securing funding for HIV health navigators at Grady Hospital, addressing housing affordability and extending protections to victims of family violence and sexual assault.

Rep. Cannon attended the University of North Carolina at Chapel Hill, where she earned a Bachelor of Arts in Hispanic Linguistics and a Bachelor of Arts in Linguistics, and minored in Women’s and Gender Studies. During her time at UNC-Chapel Hill, Rep. Cannon was named a Camões Award Recipient and inducted into the Order of The Old Well. She also participated in the Harvard Kennedy School of Government’s Executive Education State and Local Government program. She was named by the Harvard Kennedy School (HKS) as a Bohnett LGBTQ Leaders Fellow and studied police accountability.

In service to SisterSong, the Georgia Legislative Black Caucus, NOBEL Women, the League of Women Voters, NBCSL, and the NAACP, Rep. Cannon was awarded the “Fresh Legislator” and “Joan Garner Service” awards. Rep. Cannon was named a CALS Fellow and Henry Toll Fellow by the Council of State Governments. She has also participated in the Atlanta Regional Commission’s Regional Leadership Institute.

Michelle Bennett has been involved in education for more than 20 years. Michelle has worked in schools in Washington, DC., and Atlanta. She now currently works as a lobbyist here in Georgia and spends her free time volunteering as block captain for Dekalb Democrats,  as a clinic escort with Feminist Women's Health Center, and as a poll worker for Dekalb County.

The Universal Guide to Running for Office (Paperback)

Event Summary:
Become the leader you were destined to be and learn from state elected official, Park Cannon, in The Universal Guide to Running for Office.