Steve Fiffer, Al Vivian, and Ambassador Andrew Young in conversation with Ernie Suggs Co-Author of It's In the Action: Memories of a Nonviolent Warrior 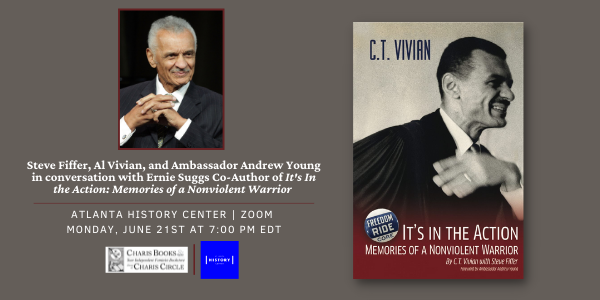 Join Steve Fiffer, Al Vivian, and Ambassador Andrew Young in conversation with Ernie Suggs Co-Author of It's In the Action: Memories of a Nonviolent Warrior for a discussion of the legacy of the late C.T. Vivian. Charis is proud to be the bookseller for this event with the Atlanta History Center. This virtual event is free and open to the public. Register here.

It's in the Action: Memories of a Nonviolent Warrior by C.T. Vivian and Ernie Suggs

The wisdom acquired during C. T. Vivian's nine decades is generously shared in It's in the Action, the civil rights legend's memoir of his life and times in the movement. Born in Missouri in 1924, Vivian lived twenty-four years in Illinois before moving to Nashville, where he earned a degree in theology and joined John Lewis, Diane Nash, and others to integrate the city in 1960. After being imprisoned and beaten during the Freedom Rides, he joined Dr. King at the Southern Christian Leadership Conference in Atlanta and played leading roles in integration and voting rights campaigns in Birmingham, St. Augustine, and Selma. Over the next half century, he became internationally known for his work for education and civil and human rights and against racism, hatred, and economic inequality. In 2013, Barack Obama awarded him the Presidential Medal of Freedom. Vivian passed away peacefully in Atlanta on July 17, 2020. Vivian was never defined by discrimination and hardship, although he faced many instances of both. The late civil rights leader's heart-wrenching and inspiring stories from a lifetime of nonviolent activism come just in time for a new generation of activists, similarly responding to systems of injustice, violence, and oppression. It's in the Action is a record of a life dedicated to selflessness and morality, qualities achieved by Vivian that we can all aspire to. Bearing a foreword from Andrew Young, the memoir is an important addition to civil rights history and to the understanding of movement principles and strategies.

Steve Fiffer is the author of more than a dozen nonfiction books, including award winning collaborations with Southern Poverty Law Center founder Morris Dees, human rights activist Dr. Quentin Young, and former Secretary of  State  James Baker (a New York Times bestseller).  His book, "Jimmie Lee and James: Two Lives, Two Deaths, and the Movement that Changed America," was a finalist for the Harlem Book Fair's Best Nonfiction Book of 2015. A Guggenheim Fellowship winner, Fiffer is a graduate of Yale and the University of Chicago Law School.  He lives in Evanston with his wife, novelist Sharon Fiffer.

Al Vivian is the President and CEO of BASIC Diversity, Inc. (BASIC) a full-service diversity & inclusion consultancy that has been operating nationally for over forty-five (45) years. BASIC specializes in the inter-connectedness of leadership theories and the concepts of diversity. They help organizations become more profitable by engaging and leveraging the diverse abilities of ALL their employees. BASIC’s client list includes some of the most recognizable brands on the planet: Bank of America, CNN, Coca-Cola, DuPont, Ford Motor, McDonald’s, Microsoft, The National Security Agency, The United States Army, Wal-Mart, and The World Bank.  BASIC was founded by Dr. C.T. Vivian (Al’s father), formerly a member of Dr. Martin L. King, Jr’s Executive Staff.  BASIC is best known for The Race Experience (formerly known as The Race Awareness Workshop), which has been evaluated as the most effective race relations seminar in the country; and was the first program to be the sole feature for two full consecutive days on The Oprah Winfrey Show.

Al is a former Army Captain with a Human Resources background. He has been featured and quoted by media outlets from Atlanta, GA to Nairobi, Kenya; including Forbes, CNN, USA Today, New York Times, NBC, PBS, Atlanta Journal & Constitution, Chicago Sun Times and Business Intelligence Magazine. He learned about managing diversity very early in life via personal interactions with Dr. King’s staff, and later honed his diversity skills in the Army (one of the largest and most diverse organizations in the world) where he held numerous executive positions, including Equal Opportunity Officer (the military equivalent to Diversity Manager).

Al is a member of multiple boards. He resides in Atlanta with his wife DeAna Jo. They have two adult sons.

Ambassador Andrew J. Young has earned worldwide recognition as a pioneer in and champion of civil and human rights. Young’s lifelong dedication to service is illustrated by his extensive leadership experience of over sixty-five years, serving as a member of Congress, African American U.S. Ambassador to the United Nations, Mayor of Atlanta, and ordained minister, among other positions. During the 1960s, Andrew Young was a key strategist and negotiator during Civil Rights campaigns that led to the passage of the Civil Rights Act of 1964 and the Voting Rights Act of 1965.

Appointed as an Ambassador to the United Nations in 1977, Young negotiated an end to white minority rule in Namibia and Zimbabwe and brought President Jimmy Carter's emphasis on human rights to international diplomacy efforts.

Later, as two-term Mayor of Atlanta, Young brought in over 1,100 businesses, over 70 billion in foreign direct investments and generated over a million jobs.

Young has received honorary degrees from more than 100 universities and colleges in the U.S. and abroad and has received various awards, including an Emmy Lifetime Achievement award in 2011 and the Dan Sweat Award in 2017. His portrait also became part of the permanent collection of the Smithsonian National Portrait Gallery.

Ambassador Young also serves on a number of boards, including, but not limited to, the Martin Luther King Center for Non-Violent Social Change, Morehouse College, Andrew Young School of Policy Studies at Georgia State and Americas Mart.

In 2012, Young retired from GoodWorks International, LLC, after well over a decade of facilitating sustainable economic development in the business sectors of the Caribbean and Africa.

Young was born in 1932 in New Orleans, and he currently lives in Atlanta with his wife, Carolyn McClain, who serves as Vice Chair of the Andrew J. Young Foundation. He is also a father of three daughters and one son, a grandfather of nine and a great grandfather on one.

It's in the Action: Memories of a Nonviolent Warrior (Hardcover)

Event Summary:
Join Steve Fiffer, Al Vivian, and Ambassador Andrew Young in conversation with Ernie Suggs Co-Author of It's In the Action: Memories of a Nonviolent Warrior for a discussion of the legacy of the late C.T. Vivian.