The Sisters Are Alright: Changing the Broken Narrative of Black Women in America 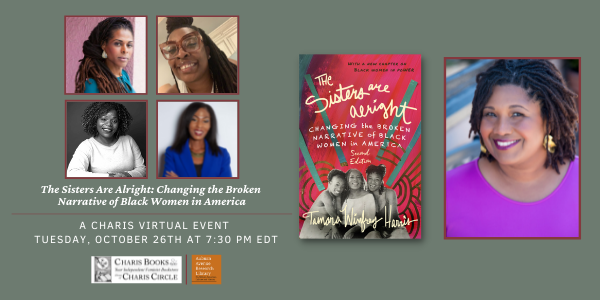 Charis welcomes Tamara Winfrey Harris in conversation with Bre Rivera, Jessica Louise, Halimah Washington, and Dr. Adia McClellan Winfrey for a celebration of the new edition of The Sisters Are Alright: Changing the Broken Narrative of Black Women in America. A slew of harmful stereotypes continues to follow Black women. The second edition of this bestseller debunks vicious misconceptions rooted in long-standing racism and shows that Black women are still alright. This event is co-hosted by the Auburn Avenue Research Library on African American Culture and History.

When African women arrived on American shores, the three-headed hydra—servile Mammy, angry Sapphire, and lascivious Jezebel—followed close behind. These stereotypes persist to this day through newspaper headlines, Sunday sermons, social media memes, cable punditry, government policies, big-screen portrayals, and hit song lyrics. Author Tamara Winfrey Harris reveals that while emancipation may have happened more than 150 years ago, America still won’t let a sister be free from this coven of caricatures.

The latest edition of this bestseller features new interviews with diverse Black women about marriage, motherhood, health, sexuality, beauty, and more. Alongside these authentic experiences and fresh voices, Winfrey Harris explores the evolution of stereotypes of Black women, with new real-life examples, such as the rise of blackfishing and digital blackface (which help white women rise to fame) and the media’s continued fascination with Black women’s sexuality (as with Cardi B or Megan Thee Stallion).

The second edition also includes a new chapter on Black women and power that explores how persistent stereotypes challenge Black women’s recent leadership and achievements in activism, community organizing, and politics. The chapter includes interviews with activists and civic leaders and interrogates media coverage and perceptions of Stacey Abrams, Vice President Kamala Harris, and others.

Winfrey Harris exposes anti–Black woman propaganda and shows how real Black women are pushing back against racist, distorted cartoon versions of themselves. She counters warped prejudices with the straight-up truth about being a Black woman in America.

Tamara Winfrey Harris' writing on race and gender has appeared in The New York Times, The Atlantic, New York Magazine, Los Angeles Times, Bitch, and other media. She is the author of the award-winning book, The Sisters Are Alright: Changing the Broken Narrative of Black Women in America, and Dear Black Girl: Letters From Your Sisters On Stepping Into Your Power.

Bre Rivera is a Black trans femme who has dedicated over20 years of movement building for Black trans communities. She is a multi-published researcher, writer, and co-creator of The Femme Queen Chronicle, a series about the lives of Black trans women living in Detroit, Michigan. Bre recently launched the Black Trans Fund, an incubated fund of Groundswell Fund, the first fund centering joy and liberatory practices in Black transgender and gender-expansive communities.

Before her time at Black Trans Fund, Bre served as Founding Mother and Executive Director of Trans Sistas of Color Project-Detroit, the first Black trans-led organization in Michigan. Bre is very active in various movements, serving as a board member for Positive Women’s Network-USA, Transgender Resource Center of New Mexico, Third Wave Fund, and Grantmakers for Girls of Color.

Jessica “Jess” Louise (they/them/she) is a community organizer with Indy10 Black Lives Matter, Queering Indy, and the Louisville Community Bail Fund. Their vocation is animated by daring ideas that reshape the world through education, direct action, and restorative and transformative justice. Jess’ work empowers people to reclaim and recast their past, present, and future. They operate with the boldness of Harriet Tubman, the incisiveness of Audre Lorde, and the rigor of Assata Shakur, believing that collective power will carry us all to freedom. When not advocating for radical justice, Jess loves reading, crocheting, dancing, playing chess, and laughing. They are born and raised in Indianapolis.

Halimah Washington is a Black mama and social justice activist/advocate from New York City. Halimah has over 15 years of experience in human services and has made it her mission to be a social change agent. She has been action-oriented, lobbying in Albany as an activist and advocate fighting for criminal justice reform, reproductive justice, education reform, fair and affordable housing and HIV/AIDS-related issues. She continues her activism efforts with the #endASFA, #AbolishACS and #DefundACS campaigns and her advocacy efforts through work as a Birth Justice Defender. Halimah is a Columbia University Beyond the Bars Fellow and NYC Department of Health Birth Justice Defender

Branded as “The Hip Hop Congressional Candidate,” her campaign received national attention for her use of Hip Hop culture as a tool of political mobilization. After garnering a vote count of over 103,000, Winfrey formed Transform Alabama, a political mobilization and education organization.

Winfrey’s organizing and social justice work began in middle school, and in 1996 at the age of 16, she was selected as the Olympic Torchbearer for her community activism. Being a high school student in the 90s meant coming of age during Hip Hop’s golden era. The genre, along with the community work she had already been engaged in, helped to politicize her. Winfrey is a firm believer that Hip Hop culture is a vehicle to educate, heal, and empower. Her hope is to carry on the legacies of freedom fighters that came before her, while pioneering new paths focused on healing and empowering communities through Hip Hop culture.

The Sisters Are Alright, Second Edition: Changing the Broken Narrative of Black Women in America (Paperback)

A slew of harmful stereotypes continues to follow Black women. The second edition of this bestseller debunks vicious misconceptions rooted in long-standing racism and shows that Black women are still alright.

Dear Black Girl: Letters From Your Sisters on Stepping Into Your Power (Paperback)

"Dear Black Girl is the empowering, affirming love letter our girls need in order to thrive in a world that does not always protect, nurture, or celebrate us. This collection of Black women's voices...

Therapists and counselors looking for a bold new approach to reach their teen clients will appreciate this compendium of guidance techniques, which employs examples from hip-hop culture and its impact on black youth.