Shannon Watts: Fight Like a Mother: How a Grassroots Movement Took on the Gun Lobby and Why Women Will Change the World 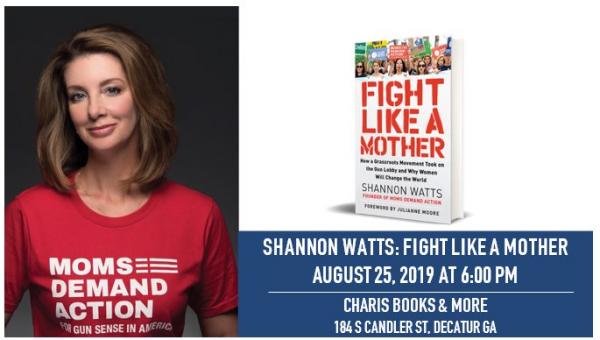 On the morning of December 14, 2012, Shannon Watts was folding laundry when news broke about a deadly shooting at an elementary school in Newtown, Connecticut. Outraged, heartbroken, and overwhelmed by a need to act, she discovered there was no gun violence prevention equivalent to Mothers Against Drunk Driving. So, the stay-at-home mother of five founded Moms Demand Action, a grassroots effort that has grown into a national organization with millions of supporters and local chapters in all 50 states.

Guns outnumber citizens in the US. Our country is home to 82% of gun deaths worldwide. And 38,658 Americans died by gun-related incidents in 2016 alone. FIGHT LIKE A MOTHER: How a Grassroots Movement Took on the Gun Lobby and Why Women Will Change the World by Shannon Watts is the powerful story of how one mother’s cry for action started a national movement to fight some of the richest and most powerful people in America: the gun lobby. Along with her observations and wisdom, Watts shares moving messages of perseverance, courage, and compassion, and outlines the core mantras and principles that Moms Demand Action has used to battle the NRA and the intimidating tactics they employ to prevent gun safety progress.

Bringing activism into the everyday, Fight Like a Mother will inspire anyone motivated to work for change and channel their values into action.

This is a Charis Circle Strong Families, Whole Children Program. There is a suggested donation of $5. No ticket is necessary. Seating is first come first served.

Fight Like a Mother: How a Grassroots Movement Took on the Gun Lobby and Why Women Will Change the World (Hardcover)

Shannon Watts was a stay-at-home mom folding laundry when news of the tragic shooting at Sandy Hook Elementary flashed across the television screen. In one moment, she went from outraged to engaged and decided to do something about it.