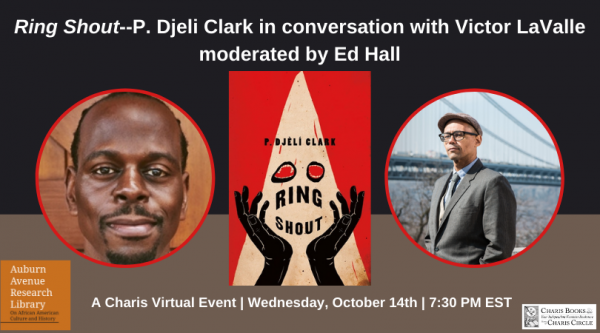 Charis welcomes P. Djeli Clark in conversation with Victor LaValle for a celebration of Clark's dark fantasy historical novella, Ring Shout. Journalist and novelist Ed Hall will moderate the conversation. This event is co-sponsored by the Auburn Avenue Research Library on African American Culture and History.

In 1915, The Birth of a Nation cast a spell across America, swelling the Klan's ranks and drinking deep from the darkest thoughts of white folk. All across the nation they ride, spreading fear and violence among the vulnerable. They plan to bring Hell to Earth. But even Ku Kluxes can die.

Standing in their way is Maryse Boudreaux and her fellow resistance fighters, a foul-mouthed sharpshooter and a Harlem Hellfighter. Armed with blade, bullet, and bomb, they hunt their hunters and send the Klan's demons straight to Hell. But something awful's brewing in Macon, and the war on Hell is about to heat up.

Born in New York and raised mostly in Houston, P. DJÈLÍ CLARK spent the formative years of his life in the homeland of his parents, Trinidad and Tobago. P. Djèlí Clark is the author of the novellas The Black God’s Drums, winner of a 2019 Alex Award from the American Library Association; The Haunting of Tram Car 015; and A Dead Djinn in Cairo. His short story “The Secret Lives of the Nine Negro Teeth of George Washington” (Fireside Fiction) has earned him both a Nebula and Locus award. He is loosely associated with the quarterly FIYAH: A Magazine of Black Speculative Fiction and an infrequent reviewer at Strange Horizons. He currently resides in New England and ruminates on issues of diversity in speculative fiction.

Victor LaValle is the author of the short story collection Slapboxing with Jesus, four novels, The Ecstatic, Big Machine, The Devil in Silver, and The Changeling and two novellas, Lucretia and the Kroons and The Ballad of Black Tom. He is also the creator and writer of a comic book Victor LaValle's DESTROYER. He has been the recipient of numerous awards including the World Fantasy Award, British World Fantasy Award, Bram Stoker Award, Whiting Writers' Award, a Guggenheim Fellowship, Shirley Jackson Award, American Book Award, and the key to Southeast Queens. He was raised in Queens, New York. He now lives in Washington Heights with his wife and kids. He teaches at Columbia University.

Ed Hall: Alabama escapee and lifelong Southerner Edward Austin Hall co-edited the 2013 anthology Mothership: Tales from Afrofuturism and Beyond, which The Magazine of Fantasy and Science Fiction suggested might be “one of the most important sf anthologies of the decade.” Dread Isle is his forthcoming first novel.

“A fantastical, brutal and thrilling triumph of the imagination...Clark’s combination of historical and political reimagining is cathartic, exhilarating and fresh.” —The New York Times

The Haunting of Tram Car 015 (Paperback)

P. Djl Clark returns to the historical fantasy universe of "A Dead Djinn in Cairo", with the otherworldly adventure novella The Haunting of Tram Car 015.

Twelve original and interconnected stories in the traditions of Junot Díaz and Sherman Alexie. Victor D. LaValle's astonishing, violent, and funny debut offers harrowing glimpses at the vulnerable lives of young people who struggle not only to come of age, but to survive the city streets.