The Right to Sex: Feminism in the Twenty-First Century--Amia Srinivasan in conversation with Moira Weigel 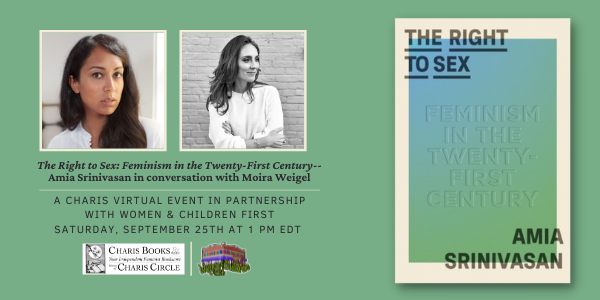 How should we think about sex? It is a thing we have and also a thing we do; a supposedly private act laden with public meaning; a personal preference shaped by outside forces; a place where pleasure and ethics can pull wildly apart.

How should we talk about sex? Since #MeToo many have fixed on consent as the key framework for achieving sexual justice. Yet consent is a blunt tool. To grasp sex in all its complexity—its deep ambivalences, its relationship to gender, class, race and power—we need to move beyond yes and no, wanted and unwanted.

We do not know the future of sex—but perhaps we could imagine it. Amia Srinivasan’s stunning debut helps us do just that. She traces the meaning of sex in our world, animated by the hope of a different world. She reaches back into an older feminist tradition that was unafraid to think of sex as a political phenomenon. She discusses a range of fraught relationships—between discrimination and preference, pornography and freedom, rape and racial injustice, punishment and accountability, students and teachers, pleasure and power, capitalism and liberation.

The Right to Sex: Feminism in the Twenty-First Century is a provocation and a promise, transforming many of our most urgent political debates and asking what it might mean to be free.

Amia Srinivasan is the Chichele Professor of Social and Political Theory at All Souls College, Oxford, where she works on and teaches political philosophy, feminist theory and epistemology. She is a contributing editor at the London Review of Books. Her essays and criticism—on animals, incels, death, the university, technology, political anger and other topics—have also appeared in The New Yorker, The New York Review of Books, The New York Times, Harper’s, The Nation and TANK.

Moira Weigel is a scholar and founding editor of Logic magazine. Originally trained in modern languages, including German and Mandarin Chinese, she now studies digital media in a global context, with a strong interest in feminism, gender, and sexuality. She is an Assistant Professor at Northeastern University, a former Junior Fellow at the Harvard Society of Fellows, and author of Labor of Love: The Invention of Dating (2016) and co-editor of Voices from the Valley (2020). Her essays have appeared in the New York Times, The New Republic, The Guardian and many other outlets.

The Right to Sex: Feminism in the Twenty-First Century (Hardcover)

“Laser-cut writing and a stunning intellect. If only every writer made this much beautiful sense.”
—Lisa Taddeo, author of Three Women

Labor of Love: The Invention of Dating (Paperback)

“Does anyone date anymore?” Today, the authorities tell us that courtship is in crisis. But when Moira Weigel dives into the history of sex and romance in modern America, she discovers that authorities have always said this. Ever since young men and women started to go out together, older generations have scolded them: That’s not the way to find true love.

Voices from the Valley: Tech Workers Talk About What They Do--and How They Do It (FSG Originals x Logic) (Paperback)

From FSGO x Logic: anonymous interviews with tech workers at all levels, providing a bird's-eye view of the industry

Event Summary:
Charis and fellow feminist bookstore, Women & Children First, are proud to welcome Amia Srinivasan in conversation with Moira Weigel for a celebration of The Right to Sex: Feminism in the Twenty-First Century.