Recollections of My Nonexistence: Rebecca Solnit in conversation with Eula Biss 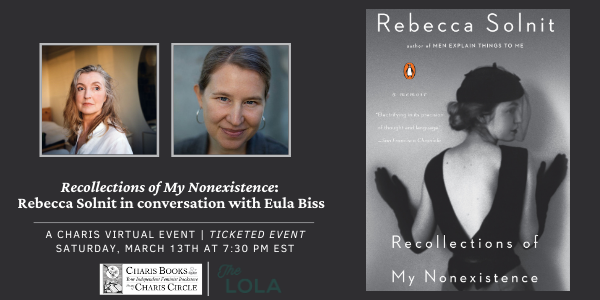 Charis welcomes Rebecca Solnit in conversation with Eula Biss for a celebration of Recollections of My Nonexistence: A Memoir. An electric portrait of the artist as a young woman that asks how a writer finds her voice in a society that prefers women to be silent. This event is co-sponsored by The Lola. The Lola's mission is to bring together womxn as allies and accomplices to tell our stories, raise our voices, and dismantle a system that doesn't serve us. Click here to learn more.

This is a ticketed event! The ticket includes a copy of Recollections of My Nonexistence: A Memoir from Charis. You may attend by purchasing a ticket via Eventbrite. You will receive a follow-up email two days before the event with a personalized code you will use to register for the event on crowdcast by clicking here. Codes are not transferable. Ticketing will close at 3 PM EST on the day of the event. All tickets purchased after March 11th will receive an event entry code on the day of the event at 4 PM EST.

In Recollections of My Nonexistence, Rebecca Solnit describes her formation as a writer and as a feminist in 1980s San Francisco, in an atmosphere of gender violence on the street and throughout society and the exclusion of women from cultural arenas. She tells of being poor, hopeful, and adrift in the city that became her great teacher, and of the small apartment that, when she was nineteen, became the home in which she transformed herself. She explores the forces that liberated her as a person and as a writer--books themselves; the gay community that presented a new model of what else gender, family, and joy could mean; and her eventual arrival in the spacious landscapes and overlooked conflicts of the American West.

Beyond being a memoir, Solnit's book is also a passionate argument: that women are not just impacted by personal experience, but by membership in a society where violence against women pervades. Looking back, she describes how she came to recognize that her own experiences of harassment and menace were inseparable from the systemic problem of who has a voice, or rather who is heard and respected and who is silenced--and how she was galvanized to use her own voice for change.

About the author and moderator:

Rebecca Solnit is the author of more than twenty books, including A Field Guide to Getting Lost, The Faraway Nearby, A Paradise Built in Hell, and Wanderlust. She is also the author of Men Explain Things to Me and many essays on feminism, activism and social change, hope, and the climate crisis. A product of the California public education system from kindergarten to graduate school, she is a regular contributor to The Guardian and other publications.

Eula Biss is the author of four books, most recently Having and Being Had. Her book On Immunity was named one of the Ten Best Books of 2014 by the New York Times Book Review, and Notes from No Man’s Land won the National Book Critics Circle award for criticism in 2009. Her essays and prose poems have recently appeared in the Guardian, the New York Review of Books, The Believer, Freeman’s, Jubilat, the Baffler, Harper’s, and the New York Times Magazine. She teaches nonfiction writing at Northwestern University.

Recollections of My Nonexistence: A Memoir (Paperback)

An electric portrait of the artist as a young woman that asks how a writer finds her voice in a society that prefers women to be silent, from the author of Orwell's Roses

Having and Being Had (Hardcover)

NAMED A BEST BOOK OF THE YEAR BY TIME , NPR, INSTYLE, AND GOOD HOUSEKEEPING

Event Summary:
Charis welcomes Rebecca Solnit in conversation with Eula Biss for a celebration of Recollections of My Nonexistence: A Memoir.