Reclaiming Judaism from Zionism: An evening with Ilise Cohen 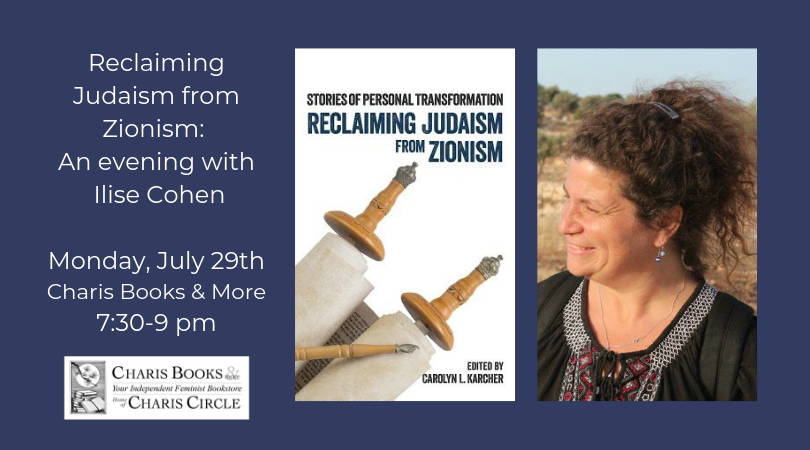 Atlanta Jewish Voice for Peace organizer and writer Ilise Cohen comes to Charis to discuss her contributions to the anthology: Reclaiming Judaism from Zionism: Stories of Personal Transformation. In this powerful collection of personal narratives, forty Jews of diverse backgrounds tell a wide range of stories about the roads they have traveled from a Zionist world view to activism in solidarity with Palestinians and Israelis striving to build an inclusive society founded on justice, equality, and peaceful coexistence.

Reclaiming Judaism from Zionism will be controversial. Its contributors welcome the long overdue public debate. They want to demolish stereotypes of dissenting Jews as “self-hating,” traitorous, and anti-Semitic. They want to introduce readers to the large and growing community of Jewish activists who have created organizations such as Jewish Voice for Peace, IfNotNow, and Open Hillel. They want to strengthen alliances with progressives of all faiths. Above all, they want to nurture models of Jewish identity that replace ethnic exclusiveness with solidarity, Zionism with a Judaism once again nourished by a transcendent ethical vision.

Ilise Benshushan Cohen is a Sephardic Jewish Atlantan with family roots from the Ottoman Empire including Turkey and the Isle of Rhodes and Cuba and identifies as Sephardi/Mizrahi and as a Middle Eastern and Hispanic Jew. Ilise is a scholar-activist on Israel/Palestine and has her Ph.D. in Social/Cultural [Postcolonial] Anthropology focused primarily on Israeli Mizrahi Jewish (Jews whose ancestry are from the Arab and Muslim world) experiences of war and eviction in 2006/2007.  In the 1990s, she studied and then lived and worked in Israel with Palestinians and Jews, as a community organizer for Interns for Peace and then Givat Haviva. She returned to Atlanta and served as the director of AFSC’s Middle East Peace Education Program in the Southeast for several years. Ilise is former chair and board member of Interfaith Peace-Builders ( now Eyewitness Palestine) and has co-led several delegations to Israel/Palestine. She served as co-vice chair of the national council of the Fellowship of Reconciliation, the oldest pacifist organization in the US. Ilise is a founder and co-coordinator of the Jewish Voice for Peace-Atlanta chapter and is part of the Global Jewish Network working for an end to the occupation. She is a co-founder and former co-coordinator of the Jews of Color/Sephardi/Mizrahi caucus. Ilise is committed to and involved in education, critical thinking and organizing for justice in Palestine-Israel and anti-racist activism and organizing. She taught Jewish Studies classes for undergraduates classes at Agnes Scott College and has taught postgraduate courses on international policy and human rights, identity and diversity at Smith College, the School for Social Work.  She recently co-taught issues of Global Justice at Mercer and a Middle East course at Academe of the Oaks. Ilise also teaches Hebrew for b'nai mitzvah and mentors young Jews and allies.  Besides her recent chapter contribution to the newly published book Reclaiming Judaism from Zionism: Stories of Personal Transformation, she wrote a chapter in On Anti-Semitism: Solidarity and the Struggle for Justice, and articles in The Nation, Mondoweiss, and the Atlanta Jewish Times. She lives in Decatur, GA with her family.  She will be speaking about her chapter 'Dismantling Zionism: Centering Equality and Justice'.

This is a Charis Circle From Margin to Center Literary Program. The suggested donation is $5.