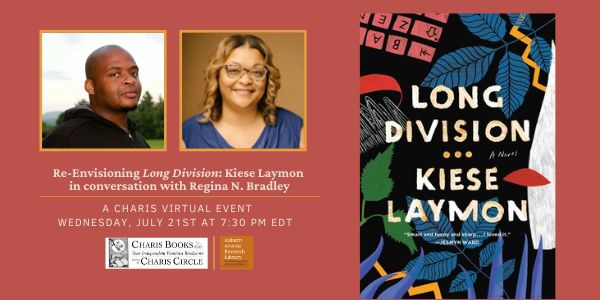 Charis welcomes Kiese Laymon in conversation with Regina N. Bradley for a celebration of the new edition of Long Division, Laymon's first novel, a satirical exploration of celebrity, authorship, violence, religion, and Black teenagers coming of age in post-Katrina Mississippi, now available in its original form as Laymon intended it. The conversation will explore life and art as ongoing revisions. This event is co-hosted by the Auburn Avenue Research Library on African American Culture and History. This event takes place on crowdcast, Charis' virtual event platform. Register here.

Written in a voice that’s alternately humorous, lacerating, and wise, Long Division features two interwoven stories. In the first, it’s 2013: after an on-stage meltdown during a nationally televised quiz contest, fourteen-year-old Citoyen “City” Coldson becomes an overnight YouTube celebrity. The next day, he’s sent to stay with his grandmother in the small coastal community of Melahatchie, where a young girl named Baize Shephard has recently disappeared.

Before leaving, City is given a strange book without an author called Long Division. He learns that one of the book’s main characters is also named City Coldson—but Long Division is set in 1985. This 1985-version of City, along with his friend and love interest, Shalaya Crump, discovers a way to travel into the future, and steals a laptop and cellphone from an orphaned teenage rapper called...Baize Shephard. They ultimately take these items with them all the way back to 1964, to help another time-traveler they meet to protect his family from the Ku Klux Klan.

City’s two stories ultimately converge in the work shed behind his grandmother’s house, where he discovers the key to Baize’s disappearance. Brilliantly “skewering the disingenuous masquerade of institutional racism” (Publishers Weekly), this dreamlike “smart, funny, and sharp” (Jesmyn Ward), novel shows the work that young Black Americans must do, while living under the shadow of a history “that they only gropingly understand and must try to fill in for themselves” (The Wall Street Journal).

Kiese Laymon is a Black southern writer from Jackson, Mississippi. Laymon’s bestselling memoir, Heavy: An American Memoir, won the 2019, Andrew Carnegie Medal, for Excellence in Nonfiction, the 2018 Christopher Isherwood Prize for Autobiographical Prose, the Austen Riggs Erikson Prize for Excellence in Mental Health Media, and was named one of the 50 Best Memoirs of the Past 50 Years by The New York Times. The audiobook, read by the author, was named the Audible 2018 Audiobook of the Year. Heavy was a finalist for the Hurston/Wright Legacy Award in Nonfiction and the Kirkus Prize in Nonfiction. It was named a best book of 2018 by the New York Times, Publishers Weekly, NPR, Broadly, Buzzfeed, The Washington Post, Entertainment Weekly.

Regina N. Bradley is an alumna Nasir Jones Hiphop Fellow at Harvard University and an assistant professor of English and African diaspora studies at Kennesaw State University. She is the author of Boondock Kollage; Stories from the Hip Hop South, Chronicling Stankonia: The Rise of the Hip-Hop South, and editor of the forthcoming anthology, An Outkast Reader: Essays of Race, Gender, and the Postmodern South.

From Kiese Laymon, author of the critically acclaimed memoir Heavy, comes a “funny, astute, searching” (The Wall Street Journal) debut novel about Black teenagers that is a satirical exploration of celebrity, authorship, violence, religion, and coming of age in post-Katrina Mississippi.

From Kiese Laymon, author of the critically acclaimed memoir Heavy, comes a “funny, astute, searching” (The Wall Street Journal) debut novel about Black teenagers that is a satirical exploration of celebrity, authorship, violence, religion, and coming of age in post-Katrina Mississippi.

In this powerful, provocative, and universally lau