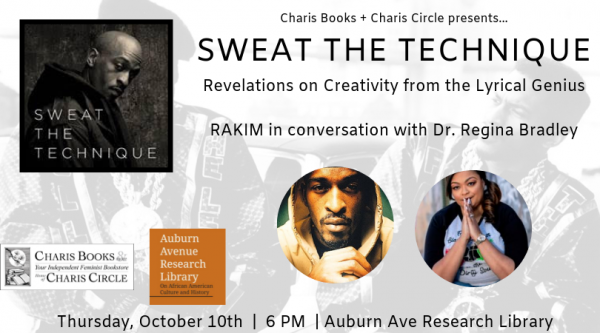 Charis and The Auburn Avenue Research Library on African American Culture and History present legendary MC Rakim for a reading and signing of his new book, Sweat the Technique: Revelations on Creativity from the Lyrical Genius.

One could look at hip hop as having two eras—Before Rakim and After Rakim. His arrival on the scene added layers, complexity, depth, musicality, and soul to rap. He discovered a new path for MCs. He changed the way MCs rhyme more than anyone ever has. He was calm on the mic and he was complicated with his rhyme patterns—he used multisyllabic rhymes and internal rhymes—and he was undeniably brilliant. He could tell a story about a man down on his luck going out to look for a job and turn it into an epic tale and an unforgettable rhyme. Rakim is not just a great songwriter—he’s one of the great writers in modern America, period.

This part memoir, part practical writing guide shows anyone how to write better, while entertaining them with rich, engaging stories from Rakim’s life that shaped him as a writer. It offers insight into how he thinks about words, music, and writing. He tells stories of his childhood, growing up in Long Island, the youngest of five in a home filled with musicians, including his mother, a classically trained opera singer. He was a rambunctious teenager who was locked up for getting caught with a gun, which he used and accidentally shot himself. He was quickly rescued from this lifestyle when he met a wise man who encouraged him to join the Nation of Islam. Around this time, he began to take hip hop more seriously, diving deep into his thoughts and theories around writing and rhyming. Sweat the Technique then reveals how he was influenced by jazz, especially the talents of John Coltrane. Rakim’s first album was written when he was 17. It blew up so fast that his management team took him out of high school his senior year to tour. Sweat the Technique takes us completely through his riveting professional career, featuring such personalities as L. L. Cool J., Dr. Dre, among others.

Interwoven throughout this memoir of the creative process is boxed text that explains the essentials of writing. Rakim shares a love for words; how to go inward to find the truth in what one is trying to convey; study the style and works of others; know your subject; express yourself (voice) in the manner that is most comfortable and not emulate others; the importance of taking your listener/reader on a journey with your storytelling; and so much more information about writing.

Regina Bradley: Dr. Regina N. Bradley is a writer and researcher of African American Life and Culture with an emphasis on the contemporary American South. She is an alumna Nasir Jones HipHop Fellow (Harvard University, Spring 2016) and is the Assistant Professor of English and African Diaspora Studies at Kennesaw State University in Kennesaw, GA.Dr. Bradley's expertise and research interests include 20th and 21st Century African American Literature, hip hop culture, race, and the contemporary U.S. South, and sound studies. She is also the co-host of the podcast Bottom of the Map. A  passionate exploration of Southern hip-hop culture and its impact on the world.

This event is free and open to the public and takes place in the Auburn Ave. auditorium. Charis Books will be on-site with books for purchase.

Sweat the Technique: Revelations on Creativity from the Lyrical Genius (Hardcover)

On the heels of Kendrick Lamar’s Pulitzer Prize, as the world begins to recognize the creative side of Hip-Hop, comes a writing guide from a musician and "The greatest MC of all time," Rakim.