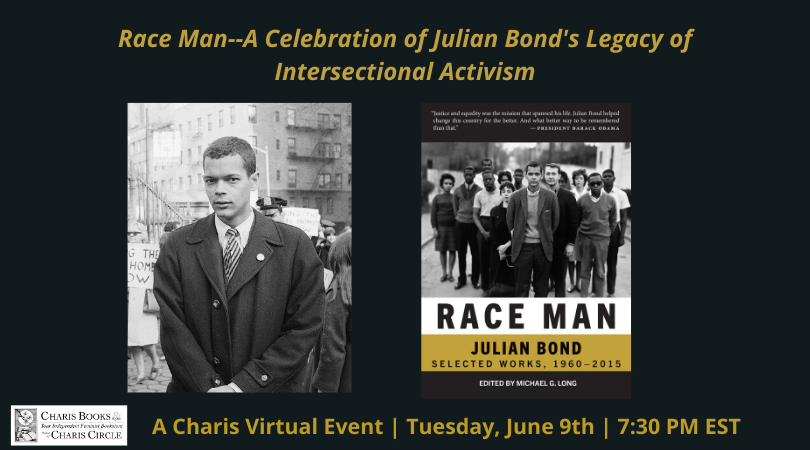 Charis is honored to present a conversation celebrating the intersectional activism and advocacy of Julian Bond on the occasion of the publication of Race Man: Selected Works, 1960-2015. Editor, Michael Long, and Pam Horowitz, Bond's widow and decades-long collaborator for justice, will discus aspects of Julian Bond's writing and work with a special focus on his lesser known passion for building bridges between the Black freedom movement and the U.S. movements for LGBTQ and women's rights.

Julian Bond was a leader in the Civil Rights Movement, politician, professor and writer. In 1960, while attending Morehouse College in Atlanta, Bond was a founding member of the Student Nonviolent Coordinating Committee, leading student protests against segregation. A founder of the Southern Poverty Law Center, he served as its president in the 1970s while sitting in the Georgia House of Representatives. In 1968, Bond led a challenge delegation from Georgia to the Democratic National Congress, where he became the first African American and the youngest person to ever be nominated for Vice President of the United States, though he was ineligible due to his young age. In 1975, after ten years in the Georgia House, he served six terms in the Georgia senate, after which he taught at numerous colleges including Drexel and Harvard. In 1998, Bond was elected Board Chairman of the NAACP and, after his term, remained active as Chairman Emeritus for eleven years. He is the author of A Time To Speak, A Time To Act, a collection of his essays, as well as Black Candidates: Southern Campaign Experiences. His writing has appeared in many magazines and newspapers. He remained President Emeritus of the Southern Poverty Law Center until his death in 2015.

This digital event will take place live on Zoom, but advance registration is required. Click here to register. We will email you the password for the event, the day of the event at the email you provide upon registration. The event is free and open to all people, especially to those who have no income or low income right now, but we encourage and appreciate a solidarity donation in support of the work of Charis Circle, our programming non-profit. Donate via this link: www.chariscircle.org/donate  Charis Circle's mission is to foster sustainable feminist communities, work for social justice, and encourage the expression of diverse and marginalized voices. As always, if you enjoy the event we ask that you buy the book from Charis via the link below.

About the Editor, Michael G. Long: Michael G. Long is the editor of Race Man: Selected Works, 1960-2015 and an associate professor of religious studies and peace and conflict studies at Elizabethtown College. He is the author or editor of numerous books on civil rights, religion, and politics, including We the Resistance: Documenting A History of Nonviolent Protest in the United States, Jackie Robinson: A Spiritual Biography; Peaceful Neighbor: Discovering the Countercultural Mister Rogers; and I Must Resist: Bayard Rustin's Life in Letters.

About Pam Horowitz (Preface): A native of Minnesota, Pamela Horowitz graduated from Macalester College with a degree in Economics. She then earned a J.D. from Boston University. As a newly minted lawyer, she was one of the first staff lawyers hired by the Southern Poverty Law Center, joining the Montgomery, Alabama based organization in 1974. During her time at the Center, she successfully argued a landmark gender discrimination case before the United States Supreme Court and won many other cases in lower federal courts. She moved to Washington, DC, in 1977 to become a legislative counsel with the National ACLU and then entered private practice, where she remained for the next 25 years. She also worked in partnership with her late husband, Julian Bond, on multiple public, private, and academic projects, including an annual civil rights tour of the South and projects involving the NAACP and the SPLC. She currently serves on the boards of the NAACP Voter Fund and the SPLC.

Newsweek, Lit Hub, The Philadelphia Inquirer, and The Atlanta Journal Constitution pick Race Man by Julian Bond as one of their Most-Anticipated Books of 2020

Event Summary:
Charis is honored to present a conversation celebrating the intersectional activism and advocacy of Julian Bond on the occasion of the publication of Race Man: Selected Works, 1960-2015.