The Perishing: Natashia Déon in conversation with Scott and Shaté Hayes 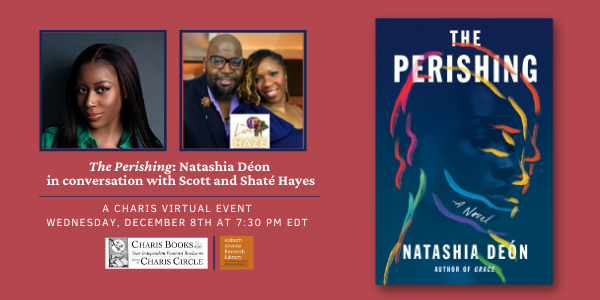 Charis welcomes Natashia Déon in conversation with Scott and Shaté Hayes for a celebration of The Perishing: A Novel. A Black immortal in 1930's Los Angeles must recover the memory of her past in order to save the world in this extraordinarily affecting novel for readers of N. K. Jemisin and Octavia E. Butler. This event is co-hosted by the Auburn Avenue Research Library on African American Culture and History.

Lou, a young Black woman, wakes up in an alley in 1930s Los Angeles, nearly naked and with no memory of how she got there or where she’s from. Taken in by a caring foster family, Lou dedicates herself to her education while trying to put her mysterious origins behind her. She’ll go on to become the first Black female journalist at the Los Angeles Times, but Lou’s extraordinary life is about to become even more remarkable. When she befriends a firefighter at a downtown boxing gym, Lou is shocked to realize that though she has no memory of meeting him, she’s been drawing his face for years.

Increasingly certain that their paths previously crossed—and beset by unexplainable flashes from different times that have been haunting her dreams—Lou begins to believe she may be an immortal sent for a very important reason, one that only others like her will be able to explain. With the help of her friends, Lou sets out to investigate the mystery of her existence and make sense of the jumble of lifetimes calling to her, just as new forces rise to threaten the existence of those around her.

Set against the rich historical landscape of Los Angeles—Prohibition, the creation of Route 66, and the collapse of the St. Francis Dam—The Perishing is a stunning examination of love and justice through the eyes of one miraculous woman whose fate seems linked to the city she comes to call home.

Natashia Deón is an NAACP Image Award Nominee, practicing criminal attorney, and college professor. A Pamela Krasney Moral Courage Fellow, Deón is the author of the critically acclaimed debut novel, Grace, which was named a Best Book by The New York Times. Deón has been awarded fellowships by PEN America, Prague Summer Program for Writers, Dickinson House in Belgium, the Bread Loaf Writers’ Conference, and the Virginia Center for the Creative Arts.

Scott A. Hayes is a Licensed Clinical Social Worker for the Domiciliary Care for Homeless Veterans Program located in Atlanta, Georgia.  He is responsible for assisting homeless veterans with obtaining employment or some other form of substantial income in hopes of transitioning them to permanent housing over the course of their 90 day stay in treatment. Scott has been a Social Worker for the last 21 years and has held direct care and administrative positions.

Scott’s professional interests are in educating minority populations regarding the importance of mental health and integrating systems to include regular psychiatric care as a part of overall health and wellness. He holds a Bachelor of Social Work degree from Tuskegee University, and a Master of Social Work Degree  from Alabama A&M University, both in Alabama. Scott is also a member of Omega Psi Phi, Fraternity Incorporated and currently resides in Metro Atlanta, Georgia.

Shaté L. Hayes is a writer and educator who’s passionate about career fulfillment.  She started her own career as a professional dancer and choreographer. After graduating with honors from Spelman College, she performed extensively throughout the U.S. and China. Her work has been commissioned by performance companies throughout the country, and she’s choreographed and produced dozens of productions including industrials, concerts, musicals, and more. Shaté served as assistant choreographer for Tony award winning Dallas Theater Center's and AT&T Performing Art Center's 2018 production of Hairspray: The Broadway Musical. Critics have called her “a talent to watch” and her movement has been described as “alone worth the price of admission.”

The Perishing: A Novel (Hardcover)

A Black immortal in 1930's Los Angeles must recover the memory of her past in order to discover who she truly is in this extraordinarily affecting novel for readers of N. K. Jemisin and Octavia E. Butler.

A New York Times Best Book of the Year

A universal story of freedom, love, and motherhood, this sweeping, intergenerational saga features a group of outcast women during one of the most compelling eras in American history.

Event Summary:
A Black immortal in 1930's Los Angeles must recover the memory of her past in order to save the world in this extraordinarily affecting novel for readers of N. K. Jemisin and Octavia E. Butler.