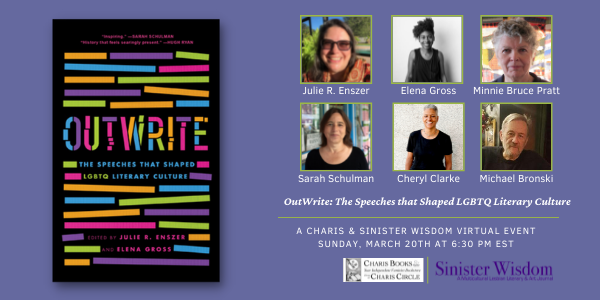 Charis and Sinister Wisdom celebrate OutWrite: The Speeches that Shaped LGBTQ Literary Culture edited by Julie R. Enszer and Elena Gross. In addition to the editors, other panelists include: Minnie Bruce Pratt, Sarah Schulman, Cheryl Clarke, and Michael Bronski. Running from 1990 to 1999, the annual OutWrite conference played a pivotal role in shaping LGBTQ literary culture in the United States and its emerging canon. This event is co-hosted by Sinister Wisdom. Sinister Wisdom is a multicultural lesbian literary & art journal that publishes four issues each year. Publishing since 1976, Sinister Wisdom works to create a multicultural, multi-class lesbian space.

OutWrite provided a space where literary lions who had made their reputations before the gay liberation movement—like Edward Albee, John Rechy, and Samuel R. Delany—could mingle, network, and flirt with a new generation of emerging queer writers like Tony Kushner, Alison Bechdel, and Sarah Schulman.

This collection gives readers a taste of this fabulous moment in LGBTQ literary history with twenty-seven of the most memorable speeches from the OutWrite conference, including both keynote addresses and panel presentations. These talks are drawn from a diverse array of contributors, including Allen Ginsberg, Judy Grahn, Essex Hemphill, Patrick Califia, Dorothy Allison, Allan Gurganus, Chrystos, John Preston, Linda Villarosa, Edmund White, and many more.

OutWrite offers readers a front-row seat to the passionate debates, nascent identity politics, and provocative ideas that helped animate queer intellectual and literary culture in the 1990s. Covering everything from racial representation to sexual politics, the still-relevant topics in these talks are sure to strike a chord with today’s readers.

Julie R. Enszer (she/her) is the author of four poetry collections, including Avowed, and the editor of The Complete Works of Pat Parker and Sister Love: The Letters of Audre Lorde and Pat Parker 1974-1989. Enszer edits and publishes Sinister Wisdom, a multicultural lesbian literary and art journal. Julie is the co-editor of OutWrite: The Speeches that Shaped LGBTQ Literary Culture. She lives in central Florida.

Elena Gross (she/they) is an independent writer, curator, and culture critic living in Oakland, California. Her research specializes in conceptual and material abstractions of the body and representations of identity in fine art, photography, and popular media. Elena is the co-editor of OutWrite: The Speeches that Shaped LGBTQ Literary Culture.

Minnie Bruce Pratt (she/her) an LGBTQ writer and activist originally from Alabama, is the author of nine books of poetry, creative nonfiction and political theory. She is a Managing Editor of Workers World/Mundo Obrero newspaper. Her most recent poetry collection is Magnified.

Sarah Schulman (she/her) is the author of more than twenty works of fiction (including The Cosmopolitans, Rat Bohemia, and Maggie Terry), nonfiction (including Stagestruck, Conflict is Not Abuse, and The Gentrification of the Mind), and theater (Carson McCullers, Manic Flight Reaction, and more), and the producer and screenwriter of several feature films (The Owls, Mommy Is Coming, and United in Anger, among others). Her writing has appeared in The New Yorker, The New York Times, Slate, and many other outlets. She is a Distinguished Professor of Humanities at College of Staten Island, a Fellow at the New York Institute of Humanities, the recipient of multiple fellowships from the MacDowell Colony, Yaddo, and the New York Foundation for the Arts, and was presented in 2018 with Publishing Triangle's Bill Whitehead Award. She is also the cofounder of the MIX New York LGBT Experimental Film and Video Festival, and the co-director of the groundbreaking ACT UP Oral History Project. A lifelong New Yorker, she is a longtime activist for queer rights and female empowerment, and serves on the advisory board of Jewish Voice for Peace.

Cheryl Clarke, Ph.D. (she/her) is a Black lesbian feminist, poet, and author of Narratives: Poems in the Tradition of Black Women (1982), Living as a Lesbian (1986), Humid Pitch (1989), Experimental Love (1993), the critical study After Mecca: Women Poets and the Black Arts Movement (Rutgers Press, 2005), and The Days of Good Looks: Prose and Poetry 1980–2005 (Carroll & Graf, 2006). Clarke has written many essays over the years relevant to the Black queer community, such as “Lesbianism: An Act of Resistance,” which first appeared in This Bridge Called My Back: Writings By Radical Women of Color (Anzaldúa and Moraga, eds., 1982), and “The Failure to Transform: Homophobia in the Black Community,” which was published in Home Girls: A Black Feminist Anthology (Smith, ed., 1984). Clarke continues to write poetry and essays. Her latest manuscript, By My Precise Haircut (2016). Further information about the author is available on her website, www.cherylclarkepoet.com.

Michael Bronski (he/him) is Professor of the Practice in Activism and Media in the Studies of Women, Gender and Sexuality at Harvard University. He has written extensively on LGBT issues for four decades, in both mainstream and queer publications including The Los Angeles Times, The Boston Globe, The San Francisco Chronicle, The Advocate, Boston Review, Lambda Book Report, Z, and The Nation. His work includes A Queer History of the United States, A Queer History of the United States for Young People (adapted by Richie Chevat, and Pulp Friction: Uncovering the Golden Age of Gay Male Pulps. He served as the program coordinator for six OutWrite conferences in the 1990s.

Running from 1990 to 1999, the annual OutWrite conference played a pivotal role in shaping LGBTQ literary culture in the United States and its emerging canon. OutWrite provided a space where literary lions who had made their reputations before the gay liberation movement—like Edward Albee, John Rechy, and Samuel R.

Once in a blue moon, a love like this comes along

Winner of the 2022 Lambda Literary LGBTQ Nonfiction Award and the 2022 NLGJA Excellence in Book Writing Award.

Conflict Is Not Abuse: Overstating Harm, Community Responsibility, and the Duty of Repair (Paperback)

From intimate relationships to global politics, Sarah Schulman observes a continuum: that inflated accusations of harm are used to avoid accountability. Illuminating the difference between Conflict and Abuse, Schulman directly addresses our contemporary culture of scapegoating.

By My Precise Haircut (Paperback)

Poetry. African & African American Studies, Women's Studies. LGBT Studies. THE HILARY THAM CAPITAL COLLECTION. Cheryl Clarke's long-awaited fifth poetry collection travels the political and spiritual trails of her many commitments--to social justice, to women of color, to the LGBTQ community, and to the rage, love, and song that live in each reader.

A Queer History of the United States (REVISIONING HISTORY #1) (Paperback)

Winner of a 2012 Stonewall Book Award in nonfiction

The first book to cover the entirety of lesbian, gay, bisexual, and transgender history, from pre-1492 to the present.