Not the Real Jupiter: Barbara Wilson in conversation with J.M. Redmann 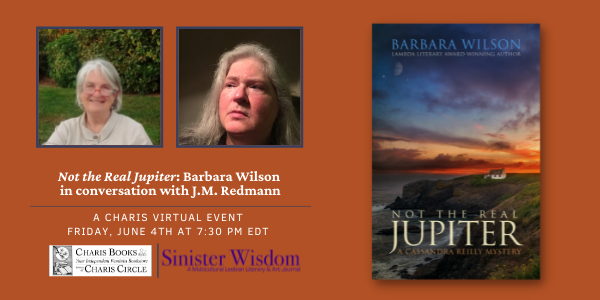 Charis welcomes Barbara Wilson in conversation with J.M. Redmann for a celebration of Not the Real Jupiter. Barbara Wilson’s Murder in the Collective was one of the first lesbian mysteries ever published. Her later Cassandra Reilly series, featuring a foot-loose Irish-American translator who solves mysteries while exploring London, Barcelona, and Venice, won her a British Crime Writers’ award. Gaudí Afternoon was made into a film with Judy Davis and Marcia Gay Hardin, and won a Lambda Literary Award. This event is co-hosted by Sinister Wisdom. Sinister Wisdom is a multicultural lesbian literary & art journal that publishes four issues each year. Publishing since 1976, Sinister Wisdom works to create a multicultural, multi-class lesbian space. This event takes place on crowdcast, Charis' virtual event platform. Register here.

Now Cassandra Reilly has returned, in a new mystery set on the Oregon coast.

Join traveling translator-sleuth Cassandra as she solves a new puzzle in the comic mystery, Not the Real Jupiter. Older, but only slightly wiser, Cassandra is translating a collection of speculative fiction by her old friend Luisa Montiflores, to be published by a small press in Portland. When editorial complications threaten the publication, Cassandra travels from Luisa’s apartment in Uruguay to the coast of Oregon to sort things out. Only to find that those complications now include a dead body on the beach. Under suspicion from the stern police detective Haakonssen and far from her base in London, Cassandra is allowed to go to Portland to investigate, but not to leave the country. Juggling a difficult translation project long-distance with her London editor and worried about losing her home in Islington if her pal Nicky moves, Cassandra follows clues in gay-friendly Portland. Here she encounters Latina writers, a well-known children’s author, and an attractive librarian in her quest to solve the mystery and get back home to London. Cassandra finds the trail is more tangled and fraught with family secrets than she ever imagined.

Barbara Wilson is the author of seven previous mysteries, translated into five languages. She is a winner of two Lambda Literary Awards and the British Crime Writers’ award for best thriller set in Europe. As Barbara Sjoholm, she is the author of memoir, travel books, and other nonfiction, and an award-winning translator. For her contributions to lesbian literature, she received the 2020 Golden Crown Literary Society Trailblazer Award.

J.M. Redmann has published ten novels featuring New Orleans PI Micky Knight. Her latest is NOT DEAD ENOUGH. Her first book was published in 1990, one of the early hard-boiled lesbian detectives. Her books have won three Lambda Literary Awards. THE INTERSECTION OF LAW & DESIRE was an Editor’s Choice of the San Francisco Chronicle and a recommended book by Maureen Corrigan of NPR’s Fresh Air. Two books were selected for the American Library Association GLBT Roundtable’s Over the Rainbow list and WATER MARK won a ForeWord Gold First Place mystery award.

She is the co-editor with Greg Herren of three anthologies, one of which, NIGHT SHADOWS: QUEER HORROR, was shortlisted for a Shirley Jackson award. Her books have been translated into German, Spanish, Dutch, Hebrew and Norwegian. She lives in New Orleans.

Not the Real Jupiter (Paperback)

Join traveling translator Cassandra Reilly as she solves a new mystery in Lambda Literary Award winner Barbara Wilson's series about the London-based, Irish-American sleuth with "a mind like a steel trap, a literate, uplifting voice, and a wicked sense of humor" (Library Journal). In Not the Real Jupiter Cassandra is translating two manuscripts from Spanish.

Event Summary:
Charis welcomes Barbara Wilson in conversation with J.M. Redmann for a celebration of Not the Real Jupiter. Barbara Wilson’s Murder in the Collective was one of the first lesbian mysteries ever published.