My People: Five Decades of Writing About Black Lives--Charlayne Hunter-Gault in conversation with Beverly Guy-Sheftall 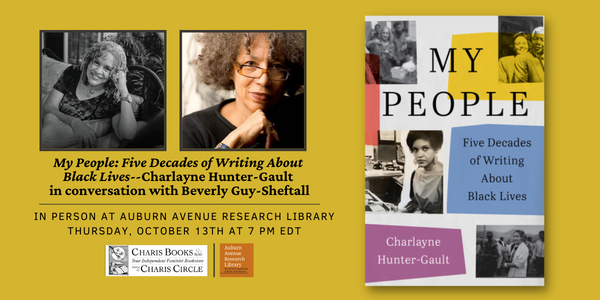 Charis and the Auburn Avenue Research Library on African American Culture and History welcome Charlayne Hunter-Gault in conversation with Beverly Guy-Sheftall for a discussion of My People: Five Decades of Writing About Black Lives. From the legendary Emmy Award-winning journalist, a collection of ground-breaking reportage from across five decades which vividly chronicles the experience of Black life in America today.

This event takes place at the Auburn Avenue Research Library (101 Auburn Ave NE, Atlanta, GA 30303) and is free and open to the public. No ticket or reservation is required to attend. Books will be available for purchase from Charis Books and More. Masks are encouraged but not required. The event will be simulcast on the Auburn Ave Facebook page (https://www.facebook.com/AuburnAvenueResearchLibrary/) for community members who do not wish to attend live.

At just eighteen years old, Charlayne Hunter-Gault made national news when she mounted a successful legal challenge that culminated in her admission to the University of Georgia in January 1961—making her one of the first two Black students to integrate the institution. As an adult, Charlayne switched from being the subject of news to covering it, becoming one of its most recognized and acclaimed interpreters.

Over more than five decades, this dedicated reporter charted a course through some of the world’s most respected journalistic institutions, including The New Yorker and the New York Times, where she was often the only Black woman in the newsroom. Throughout her storied career, Charlayne has chronicled the lives of Black people in America—shining a light on their experiences and giving a glimpse into their community as never before. Though she has covered numerous topics and events, observed as a whole, her work reveals the evolving issues at the forefront of Black Americans lives and how many of the same issues continue to persist today.

My People showcases Charlayne’s lifelong commitment to reporting on Black people in their totality, “in ways that are recognizable to themselves.” Spanning from the Civil Rights Movement through the election and inauguration of America’s first Black president and beyond, this invaluable collection shows the breadth and nuance of the Black experience through trials, tragedies, and triumphs and everyday lives.

CHARLAYNE HUNTER-GAULT is an Emmy-winning journalist. She began her career at the New Yorker, becoming the first Black reporter for the Talk of the Town section, then joined the New York Times, where she established the Harlem Bureau, the first of its kind. She eventually joined PBS NewsHour as its first substitute anchor and national correspondent. The author of five books, Hunter-Gault lives in Florida and on Martha’s Vineyard.

Beverly Guy-Sheftall is a Black feminist scholar, writer, and editor, who is the Anna Julia Cooper Professor of Women’s Studies and English at Spelman College, in Atlanta, Georgia. She is the founding director of the Spelman College Women's Research and Resource Center, the first at a historically Black college or university. Guy-Sheftall has published a number of texts within African American and Women’s Studies which include the first anthology on Black women’s literature, Sturdy Black Bridges: Visions of Black Women in Literature (Doubleday, 1979), which she coedited with Roseann P. Bell and Bettye Parker Smith; her dissertation, Daughters of Sorrow: Attitudes Toward Black Women, 1880-1920 (Carlson, 1991); Words of Fire: An Anthology of African American Feminist Thought (New Press, 1995); an anthology she coedited with Rudolph  P. Byrd entitled Traps: African American Men on Gender and Sexuality (Indiana University Press, 2001).  Her most recent publication is a coauthored monograph (with Johnnetta Betsch Cole), Gender Talk: The Struggle for Equality in African American Communities, which was published by Random House in 2003.  Upcoming publications include an anthology of Audre Lorde’s writings (with Rudolph P. Byrd and Johnnetta Betsch Cole, Oxford University Press); a new edition of But Some of Us Are Brave (with Stanlie James and Frances Foster, Feminist Press); and a collection of writings on the race/gender debate during the 2008 U.S. presidential election (with Johnnetta Betsch Cole, SUNY Press).

MARTA INFORMATION:
Take a blue or green line train to either the Georgia State or King Memorial MARTA stations. Transfer at Five Points to the first eastbound train if your starting point is on the red or gold line.

My People: Five Decades of Writing About Black Lives (Hardcover)

“Charlayne Hunter-Gault is an eminent Dean of American journalism, a vital voice whose work chronicled the civil rights movement and so much of what has transpired since then. My People is the definitive collection of her reportage and commentary.

To the Mountaintop: My Journey Through the Civil Rights Movement (New York Times) (Paperback)

A personal history of the civil rights movement from activist and acclaimed New York Times and NPR journalist Charlayne Hunter-Gault.

"In a Single Garment of Destiny": A Global Vision of Justice (King Legacy #8) (Paperback)

An unprecedented and timely collection that captures the global vision of Dr. King—in his own words

For twenty years an acclaimed correspondent on PBS's The News Hour with Jim Lehrer and the winner of two Emmys and two Peabody Awards (for her coverage of Africa), Charlayne Hunter-Gault here offers a fresh and surprisingly optimistic assessment of modern Africa, revealing that there is more to the continent than the bad news of disease, disaster, and despair.

In My Place (Paperback)

The award-winning correspondent for the MacNeil/Lehrer NewsHour gives a moment-by-moment account of her walk into history when, as a 19-year-old, she challenged Southern law--and Southern violence--to become the first black woman to attend the University of Georgia. A powerful act of witness to the brutal realities of segregation.

Words of Fire: An Anthology of African-American Feminist Thought (Paperback)

I Am Your Sister: Collected and Unpublished Writings of Audre Lorde (Transgressing Boundaries: Studies in Black Politics and Blac) (Paperback)

Audre Lorde was not only a famous poet; she was also one of the most important radical black feminists of the past century.

This is a valuable project. The editors are excellent, well-known scholars, and activists in the academy. --Darlene Clark Hine

Event Summary:
From the legendary Emmy Award-winning journalist, a collection of ground-breaking reportage from across five decades which vividly chronicles the experience of Black life in America today.