Margaret Wilkerson Sexton in Conversation with Shay Youngblood for The Revisioners 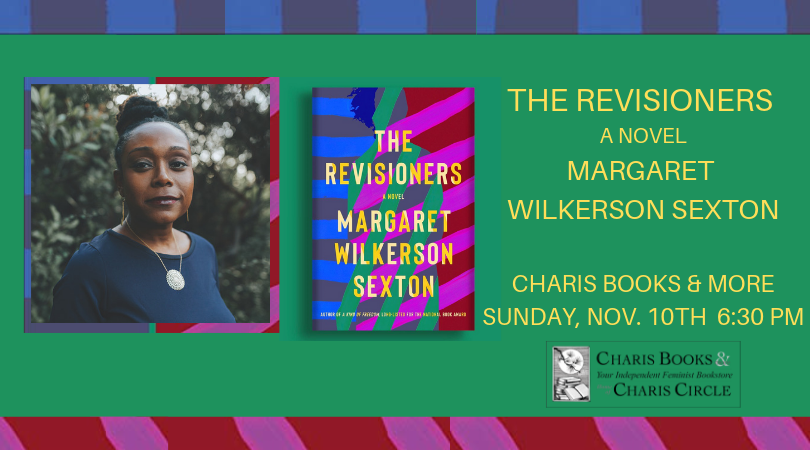 As part of Charis Books & More 45th birthday weekend, we are honored to host a conversation between Shay Youngblood and Margaret Wilkerson Sexton in honor of Sexton's new novel, The Revisioners.

In 1925, Josephine is the proud owner of a thriving farm. As a child, she channeled otherworldly power to free herself from slavery. Now, her new neighbor, a white woman named Charlotte, seeks her company, and an uneasy friendship grows between them.But Charlotte has also sought solace in the Ku Klux Klan, a relationship that jeopardizes Josephine’s family. Nearly one hundred years later, Josephine’s descendant, Ava, is a single mother who has just lost her job. She moves in with her white grandmother Martha, a wealthy but lonely woman who pays her grandchild to be her companion. But Martha’s behavior soon becomes erratic, then even threatening, and Ava must escape before her story and Josephine’s converge.

The Revisioners explores the depths of women’s relationships—powerful women and marginalized women, healers and survivors. It is a novel about the bonds between a mother and a child, the dangers that upend those bonds. At its core, The Revisioners ponders generational legacies, the endurance of hope, and the undying promise of freedom.

MARGARET WILKERSON SEXTON, born and raised in New Orleans, studied creative writing at Dartmouth College and law at UC Berkeley. Her debut novel, A Kind of Freedom, was long-listed for the National Book Award and the Northern California Book Award, won the Crook’s Corner Book Prize, and was the recipient of the First Novelist Award from the Black Caucus of the American Library Association. She lives in the San Francisco Bay Area with her family.

Shay Youngblood is the Georgia-born author of the novels Black Girl in Paris and Soul Kiss (Riverhead Books) and a collection of short fiction, The Big Mama Stories (Firebrand Books). Her published plays  Amazing Grace, Shakin' the Mess Outta Misery and Talking Bones, (Dramatic Publishing Company), have been widely produced. Her other plays include Square Blues, Black Power Barbie and Communism Killed My Dog. She is the recipient of numerous grants and awards including a Pushcart Prize for fiction, a Lorraine Hansberry Playwriting Award, an Edward Albee honoree, several NAACP Theater Awards, an Astraea Writers' Award for fiction and a 2004 New York Foundation for the Arts Sustained Achievement Award. Ms. Youngblood received her MFA in Creative Writing from Brown University and has taught Creative Writing to faculty and graduate students at NYU and has been Visiting Writer in Residence at the University of Mississippi and Texas A&M Universities. She was recently awarded a National Endowment for the Arts sponsored Japan-US Creative Artist Fellowship for 2011.

"Sexton takes on Toni Morrison's artful invocation of the ghost] in her new novel The Revisioners. . . She writes with such a clear sense of place and time that each of these intermingled stories feels essential and dramatic in its own way." --Ron Charles, The Washington Post

A Kind of Freedom (Paperback)

Big Mama Stories is set in the South in the 1960's. Daughter, whose mother died when she was very young, is raised by the women in her community, some blood related, some not. At the age of twelve, she begins her journey to womanhood, guided by these diverse, non-traditional, older Black women.