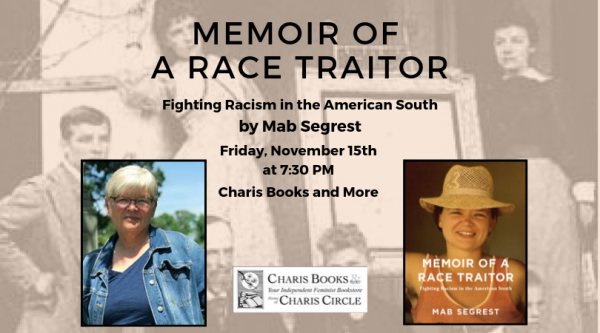 In 1994, Mab Segrest first explained how she "had become a woman haunted by the dead." Against a backdrop of nine generations of her family's history, Segrest explored her experiences in the 1980s as a white lesbian organizing against a virulent far-right movement in North Carolina.

Memoir of a Race Traitor became a classic text of white antiracist practice. bell hooks called it a "courageous and daring example of] the reality that political solidarity, forged in struggle, can exist across differences." Adrienne Rich wrote that it was "a unique document and thoroughly fascinating." Juxtaposing childhood memories with contemporary events, Segrest described her journey into the heart of her culture, finally veering from its trajectory of violence toward hope and renewal. Now, amid our current national crisis driven by an increasingly apocalyptic white supremacist movement, Segrest returns with an updated edition of her classic book. With a new introduction and afterword that explore what has transpired with the far right since its publication, the book brings us into the age of Trump--and to what can and must be done.

Charis welcomes Southerners On New Ground Co-Founder and long time friend, Mab Segrest for a wider ranging conversation about the history of white anti-racism work and what the past can teach us about our present moment.

Mab Segrest is professor emeritus of gender and women's studies at Connecticut College and the author of the forthcoming Administrations of Lunacy: Racism and the Haunting of American Psychiatry at the Milledgeville Asylum. A longtime activist in social justice movements and a past fellow at the National Humanities Center, she lives in Durham, North Carolina.

Memoir of a Race Traitor: Fighting Racism in the American South (Paperback)

Back in print after more than a decade, the singular chronicle of life at the forefront of antiracist activism, with a new introduction and afterword by the author

Today, 90 percent of psychiatric beds are located in jails and prisons across the United States, institutions that confine disproportionate numbers of African Americans.