IntersectionAllies: We Make Room for All 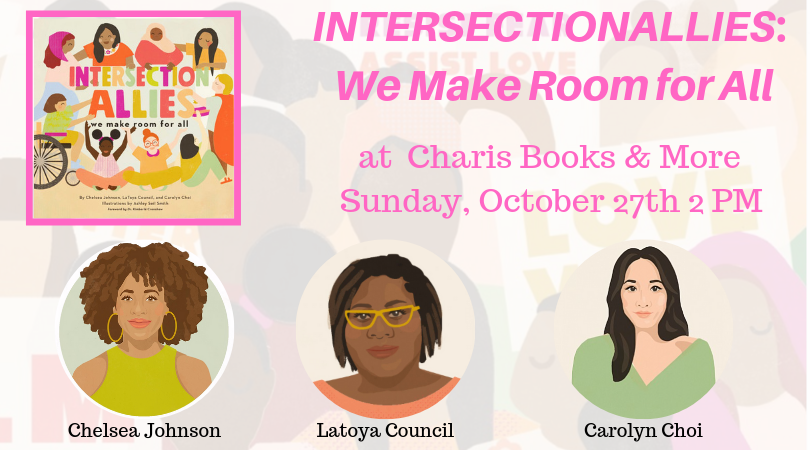 The brainchild of three women-of-color sociologists, IntersectionAllies is a smooth, gleeful entry into intersectional feminism. The nine interconnected characters proudly describe themselves and their backgrounds, involving topics that range from a physical disability to language brokering, offering an opportunity to take pride in a personal story and connect to collective struggle for justice.

The group bond grounds the message of allyship and equality. When things get hard, the kids support each other for who they are: Parker defends Kate, a genderfluid character who eschews skirts for a superhero cape; Heejung welcomes Yuri, a refugee escaping war, into their community; and Alejandra's family cares for Parker after school while her mother works. Advocating respect and inclusion, IntersectionAllies is a necessary tool for learning to embrace, rather than shy away from, difference.

Featuring gorgeous illustrations on every page by Ashley Seil Smith, as well as powerful introductions by activist and law professor Dr. Kimberle Crenshaw, who coined the term "intersectionality," and Dr. Ange-Marie Hancock Alfaro, author of Intersectionality: An Intellectual History.

Authors Carolyn Choi, LaToya Council, and Chelsea Johnson met as graduate students in the doctoral program in sociology and gender studies at the University of Southern California. Drawn to each other by a mutual desire to engage in feminist scholarship, activism, and service that transcended the "Ivory Tower," they noticed that children are often missing from public sociology and feminism. IntersectionAllies is a way to engage children at an earlier age with the concepts of intersectionality and allyship.

CHELSEA JOHNSON is a native Midwesterner but calls California home. She holds a Ph.D. in Sociology from the University of Southern California, where she studied the relationships between style, race, and politics. She believes that research is key to social justice and uses her background in intersectional feminism to inspire relatable media, reflexive scholarship, and responsible design. Her work has been featured in Quartz, Teen Vogue, Allure, CRWN Magazine, The Conversation, and more.

LATOYA COUNCIL is a Ph.D. candidate in Sociology at the University of Southern California and a feminist activist. Her research is framed by social justice. Her current research project examines professional Black men’s perception of the male breadwinner ideology. Her broader research interests explore gender, work, and family. Intersectionality frames the ways in which LaToya does allyship.

CAROLYN CHOI, A native to Los Angeles, is a Ph.D. candidate in sociology at the University of Southern California. Her works span the issues of gender, labor, youth, and international education. She also has worked in community organizing and advocacy work at the Koreatown Workers’ Alliance, Koreatown Youth & Community Center, and the Korean Resource Center.

Intersectionallies: We Make Room for All (Hardcover)

A] celebration of solidarity, allyship, and community...A welcoming resource for conversations about equality and social justice that shows readers how identities are made up of myriad influences.--PUBLISHERS WEEKLY