Her Country: How the Women of Country Music Became the Success They Were Never Supposed to Be--Marissa R. Moss in conversation with Tracey Laird 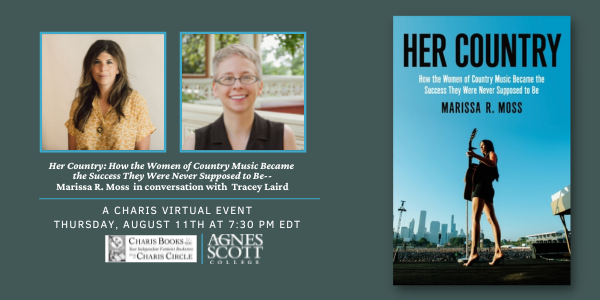 Charis and The Agnes Scott College Music Department welcome Marissa R. Moss in conversation with Tracey Laird to celebrate Her Country: How the Women of Country Music Became the Success They Were Never Supposed to Be. The full and unbridled inside story of the last twenty years of country music through the lens of Maren Morris, Mickey Guyton, and Kacey Musgraves—their peers and inspirations, their paths to stardom, and their battles against a deeply embedded boys’ club, as well as their efforts to transform the genre into a more inclusive place for all (and not just white men in trucker hats), as told by award-winning Nashville journalist Marissa R. Moss.

It was only two decades ago, but, for the women of country music, 1999 seems like an entirely different universe. With Shania Twain, country’s biggest award winner and star, and The Chicks topping every chart, country music was a woman’s world: specifically, country radio and Nashville’s Music Row.

Cut to 2021, when women are only played on country radio 16% of the time, on a good day, and when only men have won Entertainer of the Year at the CMA Awards for a decade. To a world where artists like Kacey Musgraves sell out arenas but barely score a single second of airplay. But also to a world where these women are infinitely bigger live draws than most male counterparts, having massive pop crossover hits like Maren Morris’s “The Middle,” pushing the industry to confront its deeply embedded racial biases with Mickey Guyton’s “Black Like Me,” winning heaps of Grammy nominations, banding up in supergroups like The Highwomen and taking complete control of their own careers, on their own terms. When the rules stopped working for the women of country music, they threw them out and made their own: and changed the genre forever, and for better.

Her Country is veteran Nashville journalist Marissa R. Moss’s story of how in the past two decades, country’s women fought back against systems designed to keep them down, armed with their art and never willing to just shut up and sing: how women like Kacey, Mickey, Maren, The Chicks, Miranda Lambert, Rissi Palmer, Brandy Clark, LeAnn Rimes, Brandi Carlile, Margo Price and many more have reinvented the rules to find their place in an industry stacked against them, how they’ve ruled the century when it comes to artistic output—and about how women can and do belong in the mainstream of country music, even if their voices aren’t being heard as loudly.

An award-winning journalist, Marissa R. Moss has written about the topic of gender inequality on the country airwaves for outlets like Rolling Stone, NPR, Billboard, Entertainment Weekly, and many more. Moss was the 2018 recipient of the Rolling Stone Chet Flippo Award for Excellence in Country Music Journalism, and the 2019 Nashville Scene Best of Nashville Best Music Reporter. She has been a guest on The TODAY Show, Entertainment Tonight, CBS Morning Show, NPR’s Weekend Edition, WPLN, the Pop Literacy Podcast, and more.

Tracey Laird is the Harry L., Corinne Bryant, and Cottie Beverly Slade Professor of Humanities and Professor of Music at Agnes Scott College. Her interests include intersections between race, media, region, music and identity, particularly related to southern US styles and genres.  She is co-author for the 4th edition of Bill C. Malone’s groundbreaking Country Music, U.S.A., which celebrated its 50th anniversary in 2018.  Other books include Austin City Limits: A History (OUP, 2014); Austin City Limits: A Monument to Music (Insight Editions, 2015), co-authored with Brandon Laird; and Louisiana Hayride: Radio and Roots Music Along the Red River (OUP, 2004; 2015). At Agnes Scott College, her courses include ethnomusicology, popular music, Western music history, and travel-based courses to Navajo Nation and the Sea Islands. She is currently working on a coffee table book for Quarto Press about Dolly Parton.

Please contact us at info@chariscircle.org or 404-524-0304 if you would like ASL interpretation at this event. If you would like to watch the event with live AI captions, you may do so by watching it in Google Chrome and enabling captions: Instructions here. If you have other accessibility needs or if you are someone who has skills in making digital events more accessible please don't hesitate to reach out to info@chariscircle.org. We are actively learning the best practices for this technology and we welcome your feedback as we begin this new way of connecting across distances.

Her Country: How the Women of Country Music Became the Success They Were Never Supposed to Be (Hardcover)

The full and unbridled inside story of the last twenty years of country music through the lens of Maren Morris, Mickey Guyton, and Kacey Musgraves—their peers and inspirations, their paths to stardom, and their battles against a deeply embedded boys’ club, as well as their efforts to transform the genre into a more inclusive place for all (and not just white men in trucker hats), as told by

“Fifty years after its first publication, Country Music USA still stands as the most authoritative history of this uniquely American art form. Here are the stories of the people who made country music into such an integral part of our nation’s culture.

Austin City Limits is the longest running musical showcase in the history of television, and it still captivates audiences forty years after its debut on the air.

On a Saturday night in 1948, Hank Williams stepped onto the stage of the Louisiana Hayride and sang Lovesick Blues. Up to that point, Williams's yodeling style had been pigeon-holed as hillbilly music, cutting him off from the mainstream of popular music. Taking a chance on this untried

Event Summary:
Charis and The Agnes Scott College Music Department welcome Marissa R. Moss in conversation with Tracey Laird to celebrate Her Country: How the Women of Country Music Became the Success They Were Never Supposed to Be.