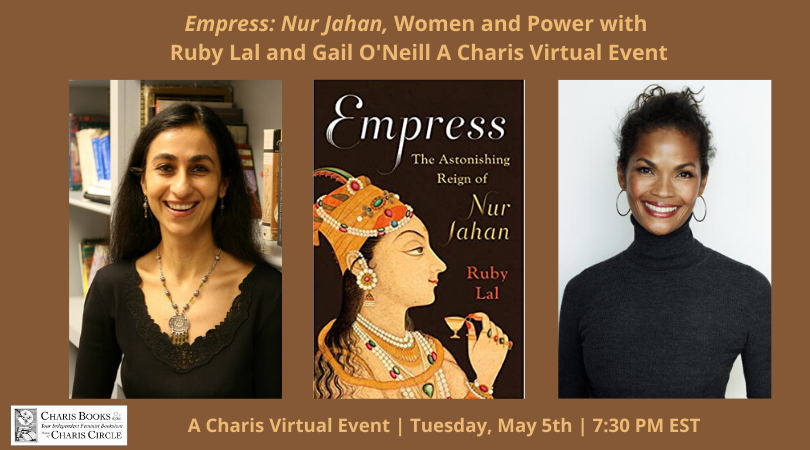 Join Charis in welcoming historian Ruby Lal and Journalist Gail O'Neill for a virtual conversation in celebration of Ruby Lal's Empress: The Astonishing Reign of Nur Jahan, now in a new paperback edition!

Four centuries ago, a Muslim woman ruled an empire. Nur Jahan, daughter of a Persian noble and widow of a subversive official, became the twentieth and most cherished wife of the Emperor Jahangir. Nur ruled the vast Mughal Empire alongside her husband, leading troops into battle, signing imperial orders, and astutely handling matters of the state.

In Empress, Ruby Lal uncovers the rich life and world of Nur Jahan, rescuing this dazzling figure from patriarchal and Orientalist clichés of romance and intrigue, and giving new insight into the lives of women and girls in the Mughal Empire. Nur Jahan finally receives her due in a deeply researched and evocative biography that awakens us to a fascinating history and offers us clues about how to think about women and power even today.

Ruby Lal is an acclaimed historian of India. Empress: The Astonishing Reign of Nur Jahan won the 2019 Georgia Author of the Year Award in Biography, and was also a finalist in History for the Los Angeles Times Book Prize. Among the top ten pick of the Time Magazine, The Telegraph and the Prospect Magazine London, Empress has been lauded by The New Yorker, The
Guardian, The New York Times, the BBC, The Indian Express, Business Standard and numerous other national and international journals, magazines and newspapers. She is Professor of South Asian History at Emory University and divides her time between Atlanta and Delhi.

Journalist Gail O'Neill is the co-creator of Collective Knowledge and a regular contributor to ArtsATL. Following graduation from Wesleyan University, New York native Gail O'Neill began a successful modeling career that has taken her around the world. She has been on the cover of magazines like Mademoiselle and Vogue, and featured in advertisements for numerous companies as well as catalogues ranging from J. Crew to Nordstrom. O'Neill started her journalism career as a freelance reporter for several television networks, eventually becoming a features correspondent for CBS's The Early Show. The opportunity to host CNN's weekly Travel Now series lured her from the Big Apple to Atlanta, where she currently lives.

This event will take place live on Charis' virtual event platform. You do not need an app or any special gear, just register for the event and watch. Click here to register now.

The event is free and open to all people, especially to those who have no income or low income right now, but we encourage and appreciate a solidarity donation in support of the work of Charis Circle, our programming non-profit. Donate via this link: www.chariscircle.org/donate  Charis Circle's mission is to foster sustainable feminist communities, work for social justice, and encourage the expression of diverse and marginalized voices. As always, if you enjoy the event we ask that you buy the book from Charis via the link below.