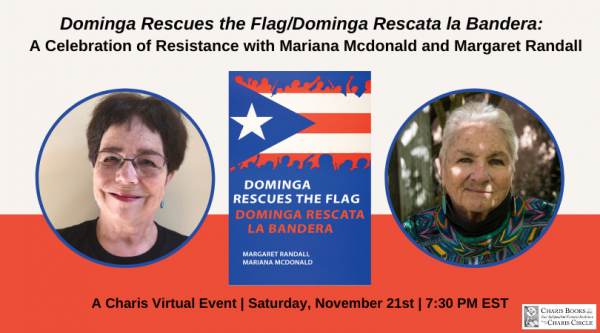 Charis welcomes Mariana Mcdonald and Margaret Randall to discuss their co-authored history of resistance, Dominga Rescues the Flag/Dominga Rescata la Bandera. Dominga is a bilingual oral history of Dominga de la Cruz, the Puerto Rican heroine “who picked up the flag at Ponce” in the midst of the bloody U.S.-ordered assault on a peaceful demonstration on March 21, 1937, known as the Ponce Massacre. Dominga de la Cruz was a black working-class Puerto Rican woman who became an activist in the Nationalist Party in the 1930’s and a protege of its leader Pedro Albizu Campos, whom she called “El Maestro.” When bullets rang out that Palm Sunday in Ponce, Dominga de la Cruz leapt from safety to rescue the Puerto Rican flag when its bearer was shot and killed. For that moment of courage, Dominga won a place in history, along with persecution, exile, and a lifetime of painful memories of her comrades drowning in blood. A lifelong activist and cultural worker, Dominga tells her story to Margaret Randall in Cuba, where Dominga found refuge. Dominga’s story is one of resistance, the pulse beat of Puerto Rican history.

Margaret Randall is a feminist poet, writer, photographer and social activist. Born in New York City in 1936, she has lived for extended periods in Albuquerque, New York, Seville, Mexico City, Havana, and Managua. Shorter stays in Peru and North Vietnam were also formative. In 1984, Margaret came home to the United States, only to be ordered deported when the government invoked the 1952 McCarran-Walter Immigration and Nationality Act, judging opinions expressed in some of her books to be "against the good order and happiness of the United States." The Center for Constitutional Rights defended her, and many writers and others joined in an almost five-year battle for reinstatement of citizenship. She won her case in 1989. She is the author of more than 150 books.

Mariana Mcdonald is a poet, writer, scientist, and activist. Her work has appeared in numerous publications, including poetry in Crab Orchard Review, Lunch Ticket, and The New Verse News; fiction in So to Speak and Cobalt; creative nonfiction in Longridge Review and HerStry; and journalism in In Motion. She co-authored with Margaret Randall the recently-published  Dominga Rescues the Flag/Dominga rescata la bandera, the story of black Puerto Rican freedom fighter Dominga de la Cruz. Mcdonald is active in social justice movements and the writing community. She lives in Atlanta.