Do the Work!: An Antiracist Activity Book--W. Kamau Bell and Kate Schatz in conversation with Alicia Garza 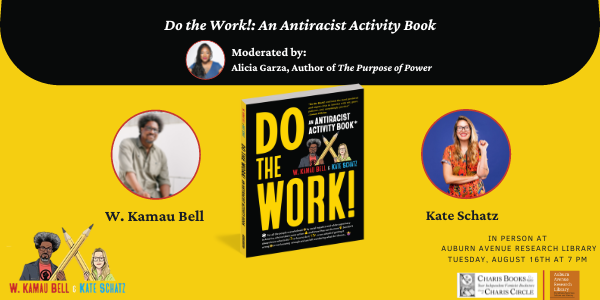 Charis and the Auburn Avenue Research Library on African American Culture and History welcome W. Kamau Bell and Kate Schatz in conversation with Alicia Garza for a book celebration and signing of Do the Work!: An Antiracist Activity Book. Overwhelmed by racial injustice? Outraged by the news? Find yourself asking, “What can I doooooo?” DO THE WORK!

This event takes place at the Auburn Avenue Research Library (101 Auburn Ave NE, Atlanta, GA 30303) and is free and open to the public. No ticket or reservation is required to attend. Books will be available for purchase from Charis Books and More. Masks are encouraged but not required. The event will be simulcast on the Auburn Ave Facebook page (https://www.facebook.com/AuburnAvenueResearchLibrary/) for community members who do not wish to attend live.

About the Book:
Revelatory and thought-provoking, this highly illustrated, highly informative interactive workbook gives readers a unique, hands-on understanding of systemic racism—and how we can dismantle it.
Packed with activities, games, illustrations, comics, and eye-opening conversation, Do the Work! Challenges readers to think critically and act effectively. Try the “Separate but Not Equal” crossword puzzle. Play “Bootstrapping, the Game” to understand the myth of meritocracy. Test your knowledge of racist laws by playing “Jim Crow or Jim Faux?”

Have hard conversations with your people (scripts and talking points included). Be open to new ideas and diversify your “feed” with a scavenger hunt. Team up with an accountability partner and find hundreds of ideas, resources, and opportunities to DO THE WORK!

W. KAMAU BELL is a dad, husband, and comedian. He directed and executive-produced the four-part Showtime documentary We Need To Talk About Cosby, which premiered at Sundance. He famously met with the KKK on his Emmy-Award-winning CNN docu-series United Shades of America with W. Kamau Bell, where he serves as host and executive producer. He has appeared on The Tonight Show with Jimmy Fallon, The Late Show with Stephen Colbert, Conan, The Daily Show with Trevor Noah, CBS Mornings, MSNBC’s Morning Joe, Comedy Central, HBO, Fresh Air with Terry Gross, WTF with Marc Maron, The Breakfast Club, and This American Life. He has two stand-up comedy specials, Private School Negro (Netflix) and Semi-Prominent Negro(Showtime). Kamau’s writing has been featured in Time, The New York Times, Vanity Fair, The Hollywood Reporter, CNN.com, Salon, and The LA Review of Books. Kamau’s first book has an easy-to-remember title, The Awkward Thoughts of W. Kamau Bell: Tales of a 6' 4", African American, Heterosexual, Cisgender, Left-Leaning, Asthmatic, Black and Proud Blerd, Mama's Boy, Dad, and Stand-Up Comedian. He is the ACLU Artist Ambassador for Racial Justice and serves on the board of directors of Donors Choose and the advisory board of Hollaback! Along with Kate Schatz, he’s the co-author of Do the Work: An Anti-Racist Activity Book. For more information, please visit: http://www.wkamaubell.com/, or follow W. Kamau on Twitter here and Instagram here.

KATE SCHATZ is an author, activist, educator, and queer feminist mama who's been talking, writing, and teaching about race, gender, social justice, and equity for many years. She's the New York Times-bestselling author of the "Rad Women" book series, (Rad American Women A-Z, Rad Women Worldwide, Rad Girls Can, and Rad American History A-Z), and her book of fiction Rid of Me: A Story is part of the cult-favorite 33 ⅓ series. Along with W. Kamau Bell, she’s the co-author of Do the Work: An Anti-Racist Activity Book. For more information, please visit: https://www.kateschatz.com/, or follow Kate on Twitter here and Instagram here.

Alicia Garza believes that Black communities deserve what all communities deserve -- to be powerful in every aspect of their lives. An author, political strategist, organizer, and cheeseburger enthusiast,  Alicia founded the Black Futures Lab to make Black communities powerful in politics. She is the co-creator of #BlackLivesMatter and the Black Lives Matter Global Network, serves as the Strategy & Partnerships Director for the National Domestic Workers Alliance, and is a co-founder of Supermajority, a new home for women’s activism. Alicia has become a powerful voice in the media and frequently contributes thoughtful opinion pieces and expert commentary on politics,  race, and more to outlets such as MSNBC and The New York Times. She has received numerous accolades and recognitions, including being on the cover of TIME’s 100 Most  Influential People in the World issue and being named to Bloomberg's 50 and Politico's 50 lists.  She is the author of the critically acclaimed book, The Purpose of Power: How We Come  Together When We Fall Apart (One World Penguin Random House), and she warns you: hashtags don’t start movements, people do.

MARTA INFORMATION:
Take a blue or green line train to either the Georgia State or King Memorial MARTA stations. Transfer at Five Points to the first eastbound train if your starting point is on the red or gold line.

Do the Work!: An Antiracist Activity Book (Paperback)

Overwhelmed by racial injustice? Outraged by the news?

You may know W. Kamau Bell from his new, Emmy-nominated hit show on CNN, United Shades of America.

Rad Women Worldwide: Artists and Athletes, Pirates and Punks, and Other Revolutionaries Who Shaped History (Hardcover)

Educational and inspirational, this gift-worthy New York Times bestseller from the authors of Rad American Women A-Z, is a bold, illustrated collection of 40 biographical profiles showcasing extraordinary women from across the globe.

"This is The Most Inspiring Children's Book We've Ever Seen."--Refinery29.com

“An engaging, fascinating, and necessary book that speaks truth to power.”—Congresswoman Barbara Lee

From the New York Times best-selling authors of Rad Women Worldwide and Rad American Women A-Z, a bold and brave collection of stories and art about inspiring and accomplished girls who have made positive impacts on the world before the age of 20.

An inspiring, empowering journal that encourages its owners to think, create, reflect, and explore their own radness.

Rid of Me joins Music From Big Pink by John Niven and Meat is Murder by Joe Pernice as one of three fictional titles in the 33 1/3 Series, and tells the story of Kathleen and Mary, two women who find themselves alone in a house in the middle of the dark, forbidden forest that borders their depressed valley town.

The Purpose of Power: How We Come Together When We Fall Apart (Paperback)

An essential guide to building transformative movements to address the challenges of our time, from one of the country’s leading organizers and a co-creator of Black Lives Matter

“Excellent and provocative . . . a gateway [to] urgent debates.”—Keeanga-Yamahtta Taylor, The New Yorker

Event Summary:
Overwhelmed by racial injustice? Outraged by the news? Find yourself asking, “What can I doooooo?” DO THE WORK!