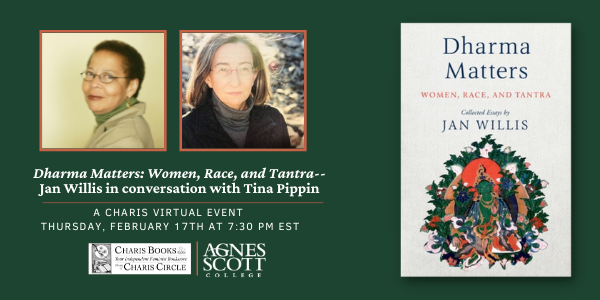 Charis and The Agnes Scott College Department of Bible and Religion welcome Jan Willis in conversation with Tina Pippin for a discussion of Dharma Matters: Women, Race, and Tantra. A powerful collection of essays on race and gender in contemporary Buddhist practice, a hot-button topic in the West right now, by one of the leading thinkers in the area.

Jan Willis was among the first Westerners to encounter exiled Tibetan teachers abroad in the late sixties, instantly finding her spiritual and academic home. TIME Magazine named her one of six “spiritual innovators for the new millennium,” both for her considerable academic accomplishments and for her cultural relevance. Her writing engages head-on with issues current to Buddhist practitioners in America, including dual-faith practitioners and those from marginalized groups.

This collection of eighteen scholarly and popular essays spans a lifetime of reflection and teaching by Willis. Grouped in four sections—Women and Buddhism, Buddhism and Race, Tantric Buddhism and Saints’ Lives, and Buddhist-Christian Reflections—the essays provide timeless wisdom for all who are interested in contemporary Buddhism and its interface with ancient tradition.

Jan Willis (BA and MA in Philosophy from Cornell University; PhD in Indic and Buddhist Studies from Columbia University) is currently Professor of Religion Emerita at Wesleyan University in Middletown, Connecticut and Visiting Professor of Religion at Agnes Scott College in Decatur, GA.  She has studied with Tibetan Buddhists in India, Nepal, Switzerland, and the U.S. for five decades, and has taught courses in Buddhism for over forty-five years.  She is the author of The Diamond Light: An Introduction to Tibetan Buddhist Meditation (1972), On Knowing Reality: The Tattvartha Chapter of Asanga's Bodhisattvabhumi (1979), Enlightened Beings: Life Stories from the Ganden Oral Tradition (1995); and the editor of Feminine Ground: Essays on Women and Tibet (1989). Additionally, Willis has published numerous articles and essays on various topics in Buddhism—Buddhist meditation, hagiography, women and Buddhism, and Buddhism and race.  In 2001, her memoir, Dreaming Me: An African American Woman’s Spiritual Journey was published. It was re-issued in 2008 by Wisdom Publications as Dreaming Me: Black, Baptist, and Buddhist—One Woman’s Spiritual Journey).

In December of 2000, TIME magazine named Willis one of six “spiritual innovators for the new millennium.”  In 2003, she was a recipient of Wesleyan University’s Binswanger Prize for Excellence in Teaching.  Newsweek magazine’s “Spirituality in America” issue in 2005 included a profile of Willis and, in its May 2007 edition, Ebony magazine named Willis one of its “Power 150” most influential African Americans.

In April of 2020, her latest book, Dharma Matters: Women, Race and Tantra; Collected Essays by Jan Willis, was published.

Tina Pippin is the Wallace M. Alston Professor of Bible and Religion at Agnes Scott College in Decatur, GA. She was a member of The Bible and Culture Collective (The Postmodern Bible, Yale UP, 1995), the author of Apocalyptic Bodies: The Biblical End of the World in Text and Image (Routledge, 1999) and the co-editor with Cheryl Kirk-Duggan of Mother Goose, Mother Jones, Mommie Dearest: Biblical Mothers and Their Children (SBL, 2009), along with other publications on apocalyptic and the Bible and film studies. Tina is the first recipient of the American Academy of Religion’s Excellence in Teaching Award. She is an activist-educator and also co-hosts a radical pedagogy podcast with Lucia Hulsether, Nothing Never Happens, at https://nothingneverhappens.org/.

A powerful collection of essays on race and gender in contemporary Buddhist practice, a hot-button topic in the West right now, by one of the leading thinkers in the area.

Jan Willis was among the first Westerners to encounter exiled Tibetan teachers abroad in the late sixties, instantly finding her spiritual and academic home.

Event Summary:
A powerful collection of essays on race and gender in contemporary Buddhist practice, a hot-button topic in the West right now, by one of the leading thinkers in the area.