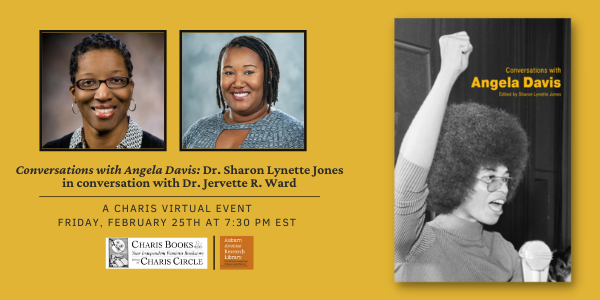 Charis welcomes Dr. Sharon Lynette Jones in conversation with Dr. Jervette R. Ward for a discussion of Conversations with Angela Davis. "Featuring seventeen interviews ranging from the 1970s to the present day, the volume chronicles Davis's life and her involvement with and influence on important and significant historical and cultural events.

When Angela Davis (b. 1944) was placed on the FBI's Ten Most Wanted list in 1970 and after she successfully gained acquittal in the 1972 trial that garnered national and international attention, she became one of the most recognizable and iconic figures in the twentieth century. An outspoken advocate for the oppressed and exploited, she has written extensively about the intersections between race, class, and gender; Black liberation; and the US prison system. Conversations with Angela Davis seeks to explore Davis's role as an educator, scholar, and activist who continues to engage in important and significant social justice work.

Davis comments on a range of topics relevant to social, economic, and political issues from national and international contexts, and taken together, the interviews explore how her views have evolved over the past several decades. The volume provides insight on Davis's relationships with such organizations as the Student Nonviolent Coordinating Committee, the Communist Party, the Green Party, and Critical Resistance, and how Davis has fought for racial, gender, and social and economic equality in the US and abroad. Conversations with Angela Davis also addresses her ongoing work in the prison abolition movement." (Text with permission from University Press of Mississippi)

Dr. Sharon Lynette Jones is presently a  Professor in the Department of English Language and Literatures at Wright State University in Ohio. She earned a B.A. degree and an M.A. degree from Clemson University, and she earned a Ph.D. from the University of Georgia. She is editor of Conversations with Angela Davis ( 2021, University Press of Mississippi). She is the author of Critical Companion to Zora Neale Hurston: A Literary Reference to Her Life and Work (2009, Facts on File) and Rereading the Harlem Renaissance: Race, Class, and Gender in the Fiction of Jessie Fauset Zora Neale Hurston, and Dorothy West  (2002, Greenwood Press).  She is the editor of Critical Insights: Zora Neale Hurston  ( 2013, Salem Press) and co-editor of  The Prentice Hall Anthology of African American Literature (2000, Prentice Hall) ( co-edited with Dr. Rochelle Smith).  She is also managing editor of CLA Journal.

Dr. Jervette R. Ward is an Associate Professor of English at Mississippi State University and is the editor of Real Sister: Stereotypes, Respectability, and Black Women in Reality TV from Rutgers University Press. She writes, teaches, and speaks on the power of language and popular culture as avenues for social change. She is the current Vice President and incoming President of the College Language Association (CLA), the oldest and largest organization for Black scholars of languages and literature. She earned her Ph.D. in English – Literary & Cultural Studies from The University of Memphis. Her forthcoming book, Black Women vs. Errbody: An Intellectual Tradition of Great Debates from The Ohio State University Press, argues that Black women have boldly and courageously sought to affirm their own humanity while simultaneously arguing for the humanity of others in a variety of arenas including literature, politics, music, and popular culture.

When Angela Davis (b. 1944) was placed on the FBI's Ten Most Wanted list in 1970 and after she successfully gained acquittal in the 1972 trial that garnered national and international attention, she became one of the most recognizable and iconic figures in the twentieth century.

From The Real Housewives of Atlanta to Flavor of Love, reality shows with predominantly black casts have often been criticized for their negative representation of African American women as loud, angry, and violent.

Event Summary:
Featuring seventeen interviews ranging from the 1970s to the present day, the volume chronicles Davis's life and her involvement with and influence on important and significant historical and cultural events.