Coming of Age in the South: A conversation with Jim Grimsley and Ashleigh Bell Pedersen Moderated by Carter Sickels 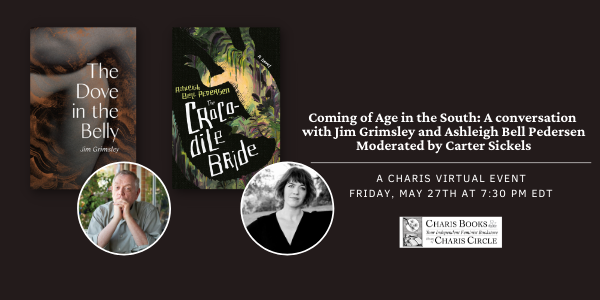 Charis presents Coming of Age in the South, a conversation with Jim Grimsley and Ashleigh Bell Pedersen, moderated by Carter Sickels (The Prettiest Star) for a celebration of The Dove in the Belly (Grimsley) and The Crocodile Bride (Bell Pedersen). The Dove in the Belly is a young adult novel about the electric, dangerous, sometimes tender but always powerful attraction between two very different boys. But it's also about the full cycles of love and life and how they open in us the twinned capacities for grief and joy. Set during the swampy summer in 1982, The Crocodile Bride is a stunning debut novel that follows eleven-year-old Sunshine Turner and her troubled father Billy as the secrets of their family's past swirl around them in the one-road town of Fingertip, Louisiana.

The Dove in the Belly

At the University of North Carolina, Ronny's made some friends, kept his secrets, survived dorm life, and protected his heart.

Until he can't. Ben is in some ways Ronny's opposite; he's big and solid where Ronny is small and slight. Ben's at UNC on a football scholarship. Confident, with that easy jock swagger, and an explosive temper always simmering. He has a steady stream of girlfriends. Ben's aware of the overwhelming effect he has on Ronny. It's like a sensation of power. So easy to tease Ronny, throw playful insults, but it all feels somehow…loaded.

Meanwhile Ronny's mother has moved to Vegas with her latest husband. And Ben's mother is fighting advanced cancer. A bubble forms around the two, as surprising to Ronny as it is to Ben. Within it their connection ignites physically and emotionally. But what will happen when the tensile strength of a bubble is tested? When the rest of life intervenes?

During a hot summer of June moods, grubworms, and dark storms, Sunshine discovers stones in her chest - and learns the dangers her coming-of-age will bring about in the yellow house she shares with her father. Without the vocabulary to comprehend Billy's actions or her own changing body, Sunshine turns to an apocryphal story passed down from her grandmother: in the dark waters of the Black Bayou lives a crocodile with an insatiable appetite and a woman with a mysterious healing gift. As Sunshine's summer unspools, she turns to the one person who will need no explanation of the family secrets she carries--the crocodile bride.

The Crocodile Bride is at once a heartbreakingly tender coming-of-age tale and a lyrical, haunting reflection on generational trauma. Reminiscent of Jesmyn Ward and Helen Oyeyemi, Ashleigh Bell Pedersen is a promising new voice in American fiction.

Jim Grimsley was born in rural eastern North Carolina and was educated at the University of North Carolina at Chapel Hill. Jim’s first novel, Winter Birds, won the Sue Kaufman Prize for best first novel from the American Academy of Arts and Letters and was a finalist for the PEN/Hemingway Award. He has published other novels, including Dream Boy, Kirith Kirin, and My Drowning. His books are available in Hebrew, German, French, Spanish, Dutch, and Portuguese. He has also published a collection of plays and most recently a memoir, How I Shed My Skin. His body of work as a prose writer and playwright was awarded the Academy Award in Literature from the American Academy of Arts and Letters in 2005. For twenty years he taught writing at Emory University in Atlanta.

Ashleigh Bell Pedersen’s fiction has been featured in New Stories from the South, The Kenyon Review, The Iowa Review, Design Observer, The Silent History, A Strange Object, and the New York Public Library’s Library Simplified app. She holds an MFA in Creative Writing from the University of Pittsburgh. She currently resides in Brooklyn, where she writes, acts in theater and film, and attempts to teach her dog, Ernie, proper leash manners.

Carter Sickels is the author of the novel The Prettiest Star, published by Hub City Press, and winner of the 2021 Southern Book Prize and the Weatherford Award. The Prettiest Star was also selected as a Kirkus Best Book of 2020 and a Best LGBT Book of 2020 by O Magazine. His debut novel The Evening Hour (Bloomsbury 2012), an Oregon Book Award finalist and a Lambda Literary Award finalist, was adapted into a feature film that premiered at the 2020 Sundance Film Festival. His essays and fiction have appeared in a variety of publications, including The Atlantic, Oxford American, Poets & Writers, BuzzFeed, Joyland, Guernica, Catapult, and Electric Literature.Carter is the recipient of the 2013 Lambda Literary Emerging Writer Award, and earned fellowships from the Bread Loaf Writers’ Conference, the Sewanee Writers’ Conference, the Virginia Center for the Creative Arts, and MacDowell. He is an assistant professor of English at Eastern Kentucky University.

The Dove in the Belly (Hardcover)

"A rich and complex coming of age tale that manages to be brave and vulnerable at once. Grimsley captures the poetry of everyday life, reminding us that each of our lives is extraordinary, if only because of our capacity to love."— New York Times best-selling author, Tayari Jones

"This book made me start work late, made me miss sleep.

Set during the swampy summer in 1982, this stunning debut novel follows eleven-year-old Sunshine Turner and her troubled father Billy as the secrets of their family's past swirl around them in the one-road town of Fingertip, Louisiana.

The Evening Hour: A Novel (Paperback)

Most of the wealth in Dove Creek, West Virginia, is in the earth-in the coal seams that have provided generations with a way of life. Born and raised here, twenty-seven-year-old Cole Freeman has sidestepped work as a miner to become an aide in a nursing home. He's got a shock of bleached blond hair and a gentle touch well suited to the job.

How I Shed My Skin: Unlearning the Racist Lessons of a Southern Childhood (Paperback)

More than sixty years ago, the Supreme Court ruled in Brown v. Board of Education that America’s schools could no longer be segregated by race. Critically acclaimed novelist Jim Grimsley was eleven years old in 1966 when federally mandated integration of schools went into effect in the state and the school in his small eastern North Carolina town was first integrated.

The Ordinary is a powerful and entrancing tale of magic, science, and the mysterious truth that binds them together.

Jim Grimsley's novels and short stories have been favorably compared to the works of Samuel R. Delany, Jack Vance, and Ursula K. Le Guin. Now he unleashes an ambitious and audacious collision between science and magic.

Jim Grimsley's previous science fiction novel, The Ordinary, was named one of the Top Ten science fiction books of the year by Booklist and won the Lambda Literary Award. His novels and short stories have been favorably compared to those of Ursula K. Le Guin, Jack Vance, and Samuel R. Delany.

Event Summary:
Charis presents Coming of Age in the South, a conversation with Jim Grimsley and Ashleigh Bell Pedersen, moderated by Carter Sickels (The Prettiest Star) for a celebration of The Dove in the Belly (Grimsley) and The Crocodile Bride (Bell).