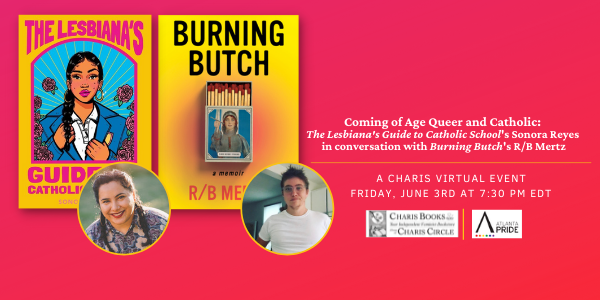 The Lesbiana's Guide to Catholic School is a sharply funny and moving debut novel about a queer Mexican American girl navigating Catholic school, while falling in love and learning to celebrate her true self. Sixteen-year-old Yamilet Flores prefers to be known for her killer eyeliner, not for being one of the only Mexican kids at her new, mostly white, very rich Catholic school. But at least here no one knows she’s gay, and Yami intends to keep it that way.  After being outed by her crush and ex-best friend before transferring to Slayton Catholic, Yami has new priorities: keep her brother out of trouble, make her mom proud, and, most importantly, don’t fall in love. Granted, she’s never been great at any of those things, but that’s a problem for Future Yami. The thing is, it’s hard to fake being straight when Bo, the only openly queer girl at school, is so annoyingly perfect. And smart. And talented. And cute. So cute. Either way, Yami isn’t going to make the same mistake again. If word got back to her mom, she could face a lot worse than rejection. So she’ll have to start asking, WWSGD: What would a straight girl do?

Told in a captivating voice that is by turns hilarious, vulnerable, and searingly honest, The Lesbiana’s Guide to Catholic School explores the joys and heartaches of living your full truth out loud.

About Burning Butch: When divorce moves young R/B Mertz away from rural Pennsylvania and their abusive father, Mertz's life is torn in two. Mertz's mom and new stepdad dive headfirst into conservative Catholic homeschooling, entrenching themselves in a world dominated by saints, prayers, and having as many babies as possible, just as Mertz is starting to realize they might be queer. Mertz clings to Catholicism as a rebellion against their anti-Catholic bio-dad, and to movies and musicals as beacons of the world outside the conservative closet constructed by the homeschoolers--who might actually be more concerned with being conservative than with being good, while Mertz's bio-dad just wants them to be "normal."Trying to stave off the inevitable, Mertz enrolls in a conservative Catholic college in Ohio. Coming of age in the early aughts, they grapple with flirtations, sexual encounters, and confusing relationships with students and faculty, as they try to figure out how to live a life in a world hell-bent on making them choose between their community and their identity. At turns rebellious, charming, and self-effacing, Mertz struggles to navigate this oppressive environment, questioning whether or not there is a place for them inside or outside of the Catholic Church; whether they can be themselves on the left or the right; whether they can be "conservative" or "liberal;" or whether they can be at all. Ultimately, Burning Butch is the courageous story of a trans / non-binary butch on a quest to survive with their authenticity intact.

Sonora Reyes (they/them) is a queer second-generation immigrant who attended a Catholic high school. They write fiction full of queer and Latinx characters in a variety of genres. Sonora is also the creator and host of #QPOCChat, a monthly community-building Twitter chat for queer writers of color. They currently live in Arizona, in a multigenerational family home with a small pack of dogs who run the place. You can visit them online at www.sonorareyes.com.

R/B Mertz (thee/thou) is a trans/non-binary butch poet and artist. They are still deciding on a first name. Mertz wrote the memoir Burning Butch (Unnamed Press, 2022), the essay, “How Whiteness Kills God & Sprinkles Crack on the Body" (published by Mistress Syndrome), and the poetry manuscript "CUT" which was a finalist for the X.P Kennedy Poetry Prize. Poems coming soon in Guernica Magazine and Arc Poetry Magazine, as well as a short play in Another Chicago Magazine. Mertz’s memoir. Burning Butch has been called “cool” by Eileen Myles and used in the same sentence as the word “classic” by Dawn Lundy Martin. Mertz is on Instagram @RBMertz but not on Twitter as of 2016 due to potential altercations with the secret service not being on Mertz’s to-do list. Mertz taught writing in Pittsburgh for eleven years and was honored to be a finalist for City of Asylum's 2020-21 Emerging Poet Laureate of Pittsburgh. On January 1, 2021, Mertz left the US for love, and they now reside in Toronto, Ontario, traditionally the territory of many nations including the Mississaugas of the Credit, the Anishnabeg, the Chippewa, the Haudenosaunee, and the Wendat peoples.

Charis Circle Executive Director, Errol "E.R." Anderson (they/them or he/him) manages the programming, fiscal, and daily operations of Charis Circle, and is always interested in the ways our communities can share skills and resources. A native Atlantan, E.R. came to Charis as one of the founding members of the Young Writer's Group in 1997, and has enjoyed helping build connections between communities of activists, artists, and academics in this city ever since. E.R. co-facilitates the Race-Conscious Parenting Collective, the Gender Creative Parenting Collective, and Trans and Friends. When not at Charis, E.R. is working on a novel, And Let God Sort Them Out.

You can enable live AI captions on Google Chrome. Please email info@chariscircle.org for ASL interpretation. If you have other accessibility needs or if you are someone who has skills in making digital events more accessible please don't hesitate to reach out to info@chariscircle.org. We are actively learning the best practices for this technology and we welcome your feedback as we begin this new way of connecting across distances.

"This blistering memoir is the book I didn't know I needed... I'm so grateful they had the courage to share their experience in such a transparent, authentic way." --One of BuzzFeed's Most Anticipated Books of 2022