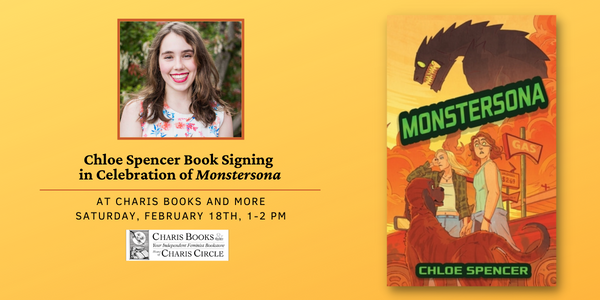 Charis welcomes Chloe Spencer for a celebration of Monstersona. Chloe will chat with readers, take photos, and sign books in person at Charis Books and More. No reservation or ticket required. Masks are required inside the store.

About Monstersona: After her parents’ divorce, 16 year old Riley Grishin is forced to move from Portland, Oregon all the way to Little Brook, Maine, a small town that serves as the headquarters for Titan Technologies, an international tech laboratory. Having left her friends and father behind, Riley spends most of her days running through the woods with her dog Tigger, and eavesdropping on her classmates—in particular, the gorgeous, but very strange, Aspen Montehugh.

On the night of the homecoming game, Riley wakes up to find her town on fire, terrorized by an unseen monster. With flames spreading rapidly, Riley and Tigger have no choice but to pile into her beat-up pickup truck and flee. Speeding out of town, they come across the only other survivor: Aspen.

When Riley and Aspen finally reach safety, they realize something far more sinister is afoot. According to the news, all other Titan Tech laboratories on the East Coast have been attacked. And even worse, they’re being followed by an SUV with blacked out windows. With all air travel grounded, Riley has no way to fly back to her dad, so she and Aspen embark on a cross country road trip, all the while pursued by men with guns, mad scientists, and the monstrous truth. Slowly, Riley realizes something's not quite right with Aspen, which puts her feelings for her—and her own humanity—to the ultimate test

Thelma and Louise meet Godzilla in this queer sci-fi adventure, that will appeal to fans of Erik. J Brown’s All That’s Left In The World and Charlotte Nicole Davies’ The Good Luck Girls.

Minnesota native Chloe Spencer is an award-winning writer, indie game developer, and filmmaker. She enjoys writing sci-fi/fantasy, horror, and romance. In her spare time, she enjoys playing video games, trying her best at Pilates, and cuddling with her cats. She holds a BA in Journalism from the University of Oregon and an MFA in Film and Television from SCAD Atlanta.