Chasing Me to My Grave: An Artist’s Memoir of the Jim Crow South by Winfred Rembert In-Person Conversation with Patsy Rembert and Rembert’s co-author Dr. Erin I. Kelly, facilitated by Artist and Curator Tracy 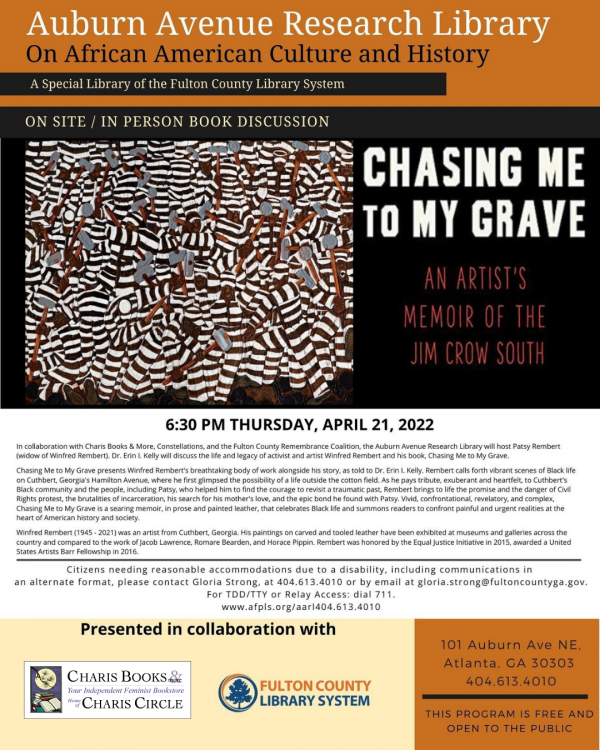 In collaboration with Charis Books & More, Georgia Humanities, Constellations, and the Fulton County Remembrance Coalition, the Auburn Avenue Research Library will host Patsy Rembert (widow of Winfred Rembert), and co-author Erin I. Kelly in a conversation on the life and legacy of Georgia-born artist Winfred Rembert and his critically acclaimed memoir, Chasing Me to My Grave, published last fall with a foreword by EJI’s Bryan Stevenson. Click here for more information about the event.

Chasing Me to My Grave presents Winfred Rembert's breathtaking body of work alongside his story, as told to Erin I. Kelly. Rembert worked the fields of Georgia as child, joined the Civil Rights movement as a teen, survived a near lynching and seven years on a chain gang, and turned to art in his 50s to record his life experiences at the urging of his wife Patsy. In his memoir, Rembert calls forth vibrant scenes of Black life on Cuthbert, Georgia's Hamilton Avenue, where he first glimpsed the possibility of a life outside the cotton field. As he pays tribute, exuberant and heartfelt, to Cuthbert's Black community and the people, including Patsy, who helped him to find the courage to revisit a traumatic past, Rembert brings to life the promise and the danger of Civil Rights protest, the brutalities of incarceration, his search for his mother's love, and the epic bond he found with Patsy. Vivid, confrontational, revelatory, and complex, Chasing Me to My Grave is a searing memoir, in prose and painted leather, that celebrates Black life and summons readers to confront painful and urgent realities at the heart of American history and society.

Winfred Rembert (1945 - 2021) was an artist from Cuthbert, Georgia. His paintings on carved and tooled leather have been exhibited at museums and galleries across the country, and compared to the work of Jacob Lawrence, Romare Bearden, and Horace Pippin. Rembert was honored by the Equal Justice Initiative in 2015, awarded a United States Artists Barr Fellowship in 2016, and is the subject of two documentary films. (More info at winfredrembert.com.)

Patsy Rembert met her late husband in 1969, while he was in prison and doing forced labor near her home in Turner County, GA. After several years of letter-writing, the two married upon his release and moved north, settling in New Haven, CT, where they raised eight children and Mrs. Rembert became a longtime youth advocate. It was Patsy who first convinced her husband to pursue art seriously, and to tell his life story visually, using the leather-tooling skills he’d learned in prison. Now Winfred’s widow, Patsy is central to the journey that became Chasing Me to My Grave: An Artist’s Memoir of the Jim Crow South.

Erin I. Kelly is a philosophy professor at Tufts University who teaches and writes about ethics, criminal law, and social justice. She is the author of a book about criminal justice called The Limits of Blame (Harvard University Press, 2018), and the co-author of Winfred Rembert’s memoir Chasing Me to My Grave (Bloomsbury, 2021).

Chasing Me to My Grave: An Artist's Memoir of the Jim Crow South (Hardcover)

By Winfred Rembert, Erin I. Kelly, Bryan Stevenson (Foreword by)
$30.00

WINNER OF THE 2022 PULITZER PRIZE IN BIOGRAPHY

Event Summary:
Chasing Me to My Grave: An Artist’s Memoir of the Jim Crow South by Winfred Rembert In-Person Conversation with Patsy Rembert (widow of Winfred Rembert) and Rembert’s co-author Dr. Erin I. Kelly, facilitated by Artist and Curator Tracy Murrell.