A Celebration of Girlhood by Melissa Febos 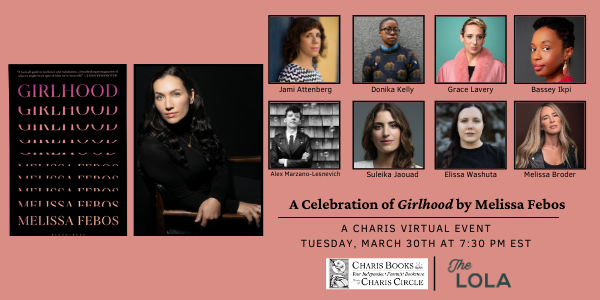 Charis welcomes Melissa Febos for a launch of Girlhood with Jami Attenberg, Donika Kelly, Grace Lavery, Bassey Ikpi, Alex Marzano-Lesnevich, Suleika Jaouad, Elissa Washuta, and Melissa Broder. A gripping set of stories about the forces that shape girls and the adults they become. A wise and brilliant guide to transforming the self and our society. This event is co-sponsored by The Lola. The Lola's mission is to bring together womxn as allies and accomplices to tell our stories, raise our voices, and dismantle a system that doesn't serve us. Click here to learn more. This event takes place on crowdcast, Charis' virtual event platform. Register here.
In her powerful new book, critically acclaimed author Melissa Febos examines the narratives women are told about what it means to be female and what it takes to free oneself from them.

When her body began to change at eleven years old, Febos understood immediately that her meaning to other people had changed with it. By her teens, she defined herself based on these perceptions and by the romantic relationships, she threw herself into headlong. Over time, Febos increasingly questioned the stories she'd been told about herself and the habits and defenses she'd developed over years of trying to meet others' expectations. The values she and so many other women had learned in girlhood did not prioritize their personal safety, happiness, or freedom, and she set out to reframe those values and beliefs.

Blending investigative reporting, memoir, and scholarship, Febos charts how she and others like her have reimagined relationships and made room for the anger, grief, power, and pleasure women have long been taught to deny.
Written with Febos' characteristic precision, lyricism, and insight, Girlhood is a philosophical treatise, an anthem for women, and a searing study of the transitions into and away from girlhood, toward a chosen self.

MELISSA FEBOS is the author of Whip Smart and Abandon Me, a Lambda Literary Award finalist and Publishing Triangle Award finalist. Her essays have appeared in Tin House, The Believer, The New York Times, and elsewhere. Febos is the inaugural winner of the Jeanne Córdova Prize for Lesbian/Queer Nonfiction from Lambda Literary and the recipient of fellowships from The MacDowell Colony, The BAU Institute, The Barbara Deming Foundation, Vermont Studio Center, Bread Loaf Writers’ Conference, The Lower Manhattan Cultural Council, and others. She is an associate professor at The University of Iowa, where she teaches in the Nonfiction Writing Program.melissafebos.com

Donika Kelly is the author of the chapbook Aviarium (fivehundred places) and the full-length collections The Renunciations (forthcoming, Graywolf) and Bestiary (Graywolf). Bestiary is the winner of the Cave Canem Poetry Prize, a Hurston/Wright Legacy Award for Poetry, and the Kate Tufts Discovery Award. She is a Cave Canem graduate fellow and member of the collective Poets at the End of the World. Her poems have been featured in The New Yorker, The Paris Review, and Foglifter. She currently lives in Iowa City and is an Assistant Professor at the University of Iowa, where she teaches creative writing.

Grace Lavery is a writer, editor, and academic living in Brooklyn, NY. As an Associate Professor of English, Critical Theory, and Gender & Women’s Studies at the University of California, Berkeley, her research explores the history and theory of aesthetics and interpretation, with particular interests in psychoanalysis, literary realism, and queer and trans cultures. Her forthcoming speculative memoir, Please Miss, will be published by Seal Press in 2022.

Her first book, Quaint, Exquisite: Victorian Aesthetics and the Idea of Japan, was published by Princeton University Press in 2019, and her scholarly essays have been published in Critical Inquiry, Differences, Social Text Online, Transgender Studies Quarterly, and elsewhere. She is a General Editor of Transgender Studies Quarterly. She writes for non-specialist readerships on queer/trans culture and politics, and has published work in Autostraddle, The Guardian, Gay Magazine, them, and Catapult, where she has an occasional film column entitled “Lurid Speculations.” Grace has a husband named Daniel and a Japanese Chin named Bon-Bon. She enjoys cooking and walking.

Bassey Ikpi embodies the brilliance of multifaceted creative minds. The writer, performer, and advocate is author of the instant New York Times bestselling book, I’m Telling the Truth, but I’m Lying (Harper Perennial 2019). Essence Magazine esteemed this debut collection of essays as “beautiful and compelling,” while Audible defines the writing as both “visceral” and “comforting.”  The compilation, which went into a second pressing on the day of its release, has earned the mental health activist stunning reviews from readers and media outlets nationwide.

Alex Marzano-Lesnevich is the author of THE FACT OF A BODY: A Murder and a Memoir, which received a Lambda Literary Award, the Chautauqua Prize, the Grand Prix des Lectrices ELLE, the Prix des libraires du Quebec, and the Prix France Inter-JDD. It has been translated into ten languages. Marzano-Lesnevich has received fellowships from The National Endowment for the Arts, MacDowell, and Yaddo, and has written for The New York Times, The Boston Globe, Harper’s, ELLE France, and many other publications. Their next book, BOTH AND NEITHER, about life beyond the gender binary, is forthcoming in 2023 from Doubleday in the US and publishers internationally. An excerpt, "Body Language," appears in THE BEST AMERICAN ESSAYS 2020. They live in Portland, Maine, and are an assistant professor at Bowdoin College.

Suleika Jaouad is an Emmy Award-winning writer, speaker, cancer survivor and the creator of The Isolation Journals, a global movement cultivating community and creativity during hard times. Born in New York City to a Tunisian father and a Swiss mother, Suleika Jaouad's career aspirations as a foreign correspondent were cut short when, at age 22, she was diagnosed with leukemia. She began writing her acclaimed New York Times column and video series "Life, Interrupted” from the front lines of her hospital bed, and has since become a fierce advocate for those living with illness and chronic pain.  She served on Barack Obama’s Presidential Cancer Panel, and her reporting, speaking and teaching engagements have brought her everywhere from the main stage of TED, the United Nations and Capitol Hill, to a maximum-security prison and a two-room schoolhouse in rural Montana. She has written reported features, essays and commentary for New York Times Magazine, Vogue, NPR, National Geographic, Glamour, and numerous other publications. Her book, Between Two Kingdoms is forthcoming in 2021 from Random House. When she’s not on the road with her 1972 Volkswagen camper van and rescue dog Oscar, she lives in Brooklyn.

Elissa Washuta is a member of the Cowlitz Indian Tribe and a nonfiction writer. She is the author of My Body Is a Book of Rules and Starvation Mode, and her book White Magic is forthcoming from Tin House Books. With Theresa Warburton, she is co-editor of the anthology Shapes of Native Nonfiction: Collected Essays by Contemporary Writers. She’s a National Endowment for the Arts Fellowship recipient, a Creative Capital awardee, and an assistant professor of creative writing at the Ohio State University.

Melissa Broder is the author of the novels MILK FED (Feb 2021; Scribner) and THE PISCES, the essay collection SO SAD TODAY, and five poetry collections, including SUPERDOOM: Selected Poems--coming this Summer from Tin House. She lives in Los Angeles.

Whip Smart: The True Story of a Secret Life (Paperback)

Named One of the Best Books of 2017 by:
Esquire, Refinery29, LitHub, BookRiot, Medium, Electric Literature, The Brooklyn Rail, Vol. 1 Brooklyn, Largehearted Boy, The Coil and The Cut.