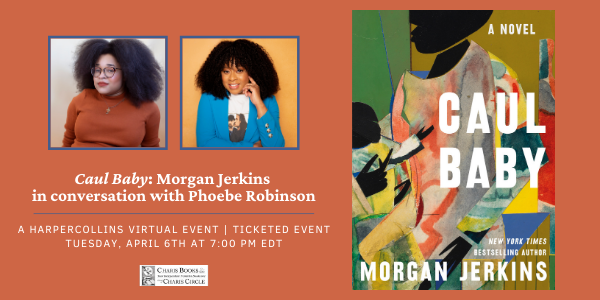 Morgan will be joined in conversation by Phoebe Robinson. This is a ticketed event. The ticket price includes a hardback copy of the book. Signed copies available on a first come, first served basis. Click here to purchase a ticket.

Prior to the event, HarperCollins will send a special password to all ticketed guests to access the virtual event. Charis Books and More will send a separate email letting you know when your book has shipped or is available for porch pick-up.

Desperate to be a mother after her multiple pregnancies ended in heartbreak, Laila turns to the Melancons, an old and powerful Harlem family known for their caul, a precious layer of skin that is the secret source of their healing power. When the deal for Laila to acquire the piece of caul falls through and her child is stillborn, she is overcome with grief and rage. What she doesn’t know is that her family will be forever intertwined with the Melancons when her niece, Amara, an ambitious college student, delivers a baby girl and gives her to the Melancons to raise as one of their own.

The baby, Hallow, is special. She is born with a caul and the Melancons’ matriarch, Maman, believes she will restore the family’s prosperity. Growing up, Hallow is kept sheltered in the Melancons’ decrepit brownstone while her cousin, Helena, is free to roam the streets. As she grows older, Hallow becomes suspicious of the Melancon women, particularly of whether Josephine, the woman she calls mother, really brought her into the world, and of Maman, who only seems to care about Hallow’s caul and the wealth it can bring to the family. As Hallow grows more distrustful of the family, the home itself begins to fall apart.

As the Melancons’ thirst to maintain their status grows, Amara, now a successful lawyer running for district attorney, looks for a way to avenge her longstanding grudge against the family. When Hallow and Amara cross paths, Hallow must decide where her loyalty lies.

Morgan Jerkins is the author of Wandering in Strange Lands and the New York Times bestseller This Will Be My Undoing. A visiting professor at Columbia University and a Forbes 30 under 30 Leader in Media, Jerkins's short form work has been featured in The New Yorker, The New York Times, The Atlantic, Rolling Stone, ELLE, Esquire, and The Guardian, among many others. She is based in Harlem.

Phoebe Robinson is best known as the co-creator and co-star of the hit WNYC Studios podcast 2 Dope Queens, which was turned into eight one-hour, critically-acclaimed HBO specials. She’s also a New York Times best-selling author of the books Everything’s Trash, But It’s Okay and You Can’t Touch My Hair and Other Things I Still Have to Explain. Additionally, Phoebe was a staff writer on the final season of Portlandia, starred in the movies Ibiza and What Men Want, and was a five-time moderator on Michelle Obama's international Becoming book tour. Most recently, Phoebe founded Tiny Reparations, a production company under ABC Studios, and TinyRep’s first project, a talk show entitled Doing the Most w/Phoebe Robinson, will premiere in 2021 on Comedy Central. She has also just launched a literary imprint called Tiny Reparations Books and released a brand-new advice-interview hybrid podcast entitled Black Frasier.

“The true strength of this book has a profound impact: in conveying the life-giving and life-sustaining power of Black women’s bodies, and the blood relationships between them. . . .

Wandering in Strange Lands: A Daughter of the Great Migration Reclaims Her Roots (Hardcover)

“One of the smartest young writers of her generation.”—Book Riot

This Will Be My Undoing: Living at the Intersection of Black, Female, and Feminist in (White) America (Paperback)

"A writer to be reckoned with." —Roxane Gay