The Black Agenda: Bold Solutions for a Broken System--Anna Gifty Opoku-Agyeman in conversation with Cliff Albright 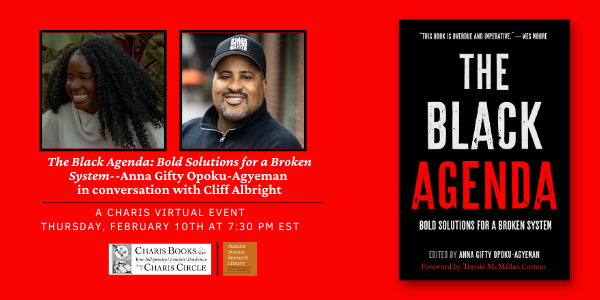 Charis welcomes Anna Gifty Opoku-Agyeman in conversation with Cliff Albright for a discussion of The Black Agenda: Bold Solutions for a Broken System. Edited by Anna Gifty Opoku-Agyeman, The Black Agenda is the first book of its kind—a bold and urgent move towards social justice through a profound collection of essays featuring Black scholars and experts across economics, education, health, climate, and technology. This event is co-hosted by the Auburn Avenue Research Library on African American Culture and History.

From ongoing reports of police brutality to the disproportionate impact COVID-19 has had on Black Americans, 2020 brought a renewed awareness to the deep-rootedness of racism and white supremacy in every facet of American life.

The Black Agenda speaks to the question "What's next for America?" on the subjects of policy-making, mental health, artificial intelligence, climate movement, the future of work, the LGBTQ community, the criminal legal system, and much more.

Essayists including Dr. Sandy Darity, Dr. Hedwig Lee, Mary Heglar, and Janelle Jones present groundbreaking ideas ranging from Black maternal and infant health to reparations to AI bias to inclusive economic policy, with the potential to uplift and heal not only Black America, but the entire country.

Anna Gifty Opoku-Agyeman is a researcher, writer, science communicator and activist, whose work has been featured in Teen Vogue, The New York Times, Slate Magazine, NPR, Fortune, Marketplace, and The Guardian. She is the co-founder of The Sadie Collective, the only nonprofit organization addressing the lack of Black women in economics and related fields. In 2020, she became the youngest recipient for the CEDAW Women's Rights Award by the UN Convention on the Elimination of all forms of Discrimination Against Women.

Cliff Albright is a co-founder of Black Voters Matter Fund (and BVM Capacity Building Institute) which builds community and organizational capacity related to Black voting power. BVM received national attention in 2017 when they helped mobilize Black voters during the U.S. Senate race between Doug Jones and Roy Moore. Since then, Cliff and the BVM team have travelled throughout thirteen primarily southern states in “The Blackest Bus in America'' energizing voters and exposing voter suppression. Cliff has contributed articles to The New York Times, Politico, The Washington Post, The Guardian and several other outlets and he has appeared on CNN, MSNBC, BBC and other networks. He also hosts a weekly radio show in Atlanta and has served as an instructor of African-American Studies at several universities. Cliff previously lived in historic Selma, Alabama, where he focused on bringing financial resources to Alabama’s blackbelt region. Cliff attended Cornell University, where he obtained his B.S. in Applied Economics and an M.P.S. in Africana Studies. He also has an M.B.A. from the University of Alabama and a 2020 Soros Equality Fellow.

The Black Agenda: Bold Solutions for a Broken System (Hardcover)

"The Black Agenda mobilizes top Black experts from across the country to share transformative perspectives on how to deploy anti-racist ideas and policies into everything from climate policy to criminal justice to healthcare.

Event Summary:
A bold and urgent move towards social justice through a profound collection of essays featuring Black scholars and experts across economics, education, health, climate, and technology.