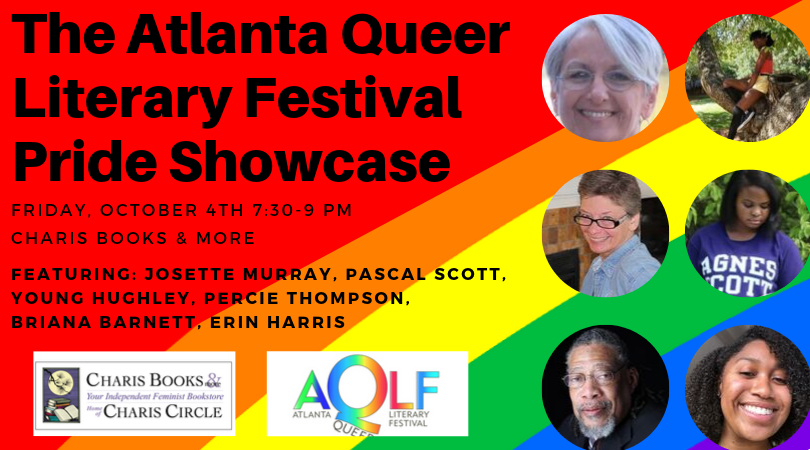 Charis and the Atlanta Queer Literary Festival Present a Pride Literary Showcase to kick off our favorite month of the year!

This is a Charis Circle From Margin to Center Literary Event. The suggested donation is $5 but no one will be turned away for lack of funds.

Briana Barnett is a senior at Agnes Scott College, majoring in Political Science with a minor in human rights. She is the president of the Student Government Association and has been a member of Agnes Scott’s IGNITE slam poetry team for three years. She was a member of Agnes Scott’s five-person slam team that placed 6th in the world at the 2018 College Unions Poetry Slam Invitational (CUPSI) college poetry competition in Philadelphia, Pennsylvania, and 14th in the 2019 Houston competition. Her motto is: “the only bad poem is an unwritten one.”

Young Hughley is an Atlanta based poet and long time co-curator of the Atlanta Queer Literary Festival.

Erin Harris is a junior and Psychology and Creative writing double major from Decatur, GA and the Vice President of Ignite. Though only having been a member of Ignite since last year, her love and enthrallment with the power of poetry and words, in general, has been apparent since she could remember.

Josette Murray, author of Silver Love and To Be Loved likes to make a point in her books, which are all about community and lesbians “of a certain age.” To one degree or another, Josette has written throughout her life, working as a freelance writer-editor for over 25 years. She has been politically active, serving as Chair of Georgia’s
GAPAC, the forerunner of the political powerhouse that is now Georgia Equality. She lives in Decatur, GA with two canine rescues and is married to another Sapphire
Books author, Pascal Scott.

Percie Thompson, an urban tree hugger, is a sophomore at Agnes Scott College majoring in Political Science with a double minor in anthropology and environmental/sustainability studies. Most comfortable when surrounded by nature, it’s common to find her lounging in a tree or writing naturalistic metaphors into her poetry.

Jill, Dory, Robby, and Charlene are a fantastic foursome that embodies the varying experiences that come with being Lesbians of a Certain Age. They are vibrant and vulnerable, wise and foolish, introspective and outgoing. The close-knit friends fight aging at every turn--or just ignore it altogether. These four will never go quietly into the night, redefining life after fifty.