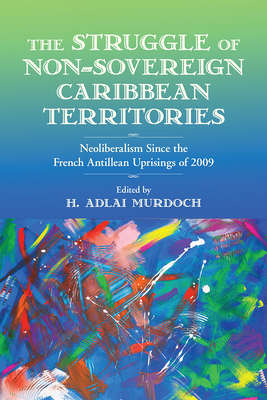 The Struggle of Non-Sovereign Caribbean Territories is an essay collection made up of two sections; in the first, a group of anglophone and francophone scholars examines the roots, effects and implications of the major social upheaval that shook Guadeloupe, Martinique, French Guiana, and Réunion in February and March of 2009. They clearly demonstrate the critical role played by community activism, art and media to combat politico-economic policies that generate (un)employment, labor exploitation, and unattended health risks, all made secondary to the supremacy of profit. In the second section, additional scholars provide in-depth analyses of the ways in which an insistence on capital accumulation and centralization instantiated broad hierarchies of market-driven profit, capital accumulation, and economic exploitation upon a range of populations and territories in the wider non-sovereign and nominally sovereign Caribbean from Haiti to the Dutch Antilles to Puerto Rico, reinforcing the racialized patterns of socioeconomic exclusion and privatization long imposed by France on its former colonial territories.

H. ADLAI MURDOCH is Professor of Romance Studies and Director of Africana Studies at Tufts University in Medford, Massachusetts.

"This splendid collection makes a major contribution to both the study of neocolonialism in the Caribbean and the conundrums faced by the non-sovereign territories of the region. It is certain to be one of the foremost books on Caribbean neoliberalism for some time to come."
— Aaron Kamugisha

"This timely collection of essays persuasively suggests that there is a universal crisis of governance and rule that extends across the entire Caribbean. The Struggle of Non-Sovereign Caribbean Territories offers a close reading of the popular demands coming from the streets alongside new, insurgent themes expressed through popular culture, all turning against the neo-liberal hegemony of the present and recent past."
— Brian Meeks