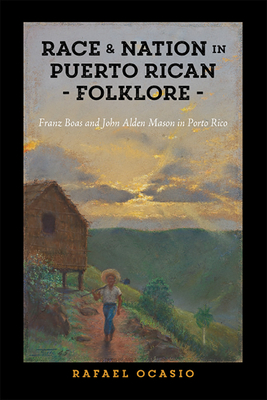 Race and Nation in Puerto Rican Folklore: Franz Boas and John Alden Mason in Porto Rico explores the historic research trip taken to Puerto Rico in 1915. As a component of the Scientific Survey of Porto Rico and the Virgin Islands, Boas intended to perform field research in the areas of anthropology and ethnography while other scientists explored the island’s natural resources. A young anthropologist working under Boas, John Alden Mason, rescued hundreds of oral folklore samples, ranging from popular songs, poetry, conundrums, sayings, and, most particularly, folktales while documenting native Puerto Rican cultural practices. Through his extensive excursions, Mason came in touch with the rural lives of Puerto Rican peasants, the jíbaros, who served as both his cultural informants and writers of the folklore samples. These stories, many of which are still part of the island’s literary traditions and collected in a bilingual companion volume by Rafael Ocasio, reflect a strong Puerto Rican identity coalescing in the face of the U.S. political intervention on the island. A fascinating slice of Puerto Rican history and culture sure to delight any reader!

RAFAEL OCASIO is the Charles A. Dana Professor of Spanish at Agnes Scott College in Atlanta, Georgia.

"Race and Nation in Puerto Rican Folklore is a must-read for those interested in the cultural layout of early twentieth-century Puerto Rico and its burgeoning, sociopolitical consciousness. Ocasio expertly traces the multicultural artifacts of oral transmission collected by ‘the Father of American Anthropology,’ Franz Boas and his mentee, John Alden Mason, on the Island at the turn of the century, revealing the relationship between those texts and Boricua identity."
— Angie Willis

"Rafael Ocasio's Race and Nation in Puerto Rican Folklore will be of significant interest to students of Puerto Rican culture and history as it skillfully revives important events involving the U.S. and Puerto Rico that have lost definition with the passing of time, even if they have not lost relevance. The author brings to bear on an anthropological topic his unique talent for literary and cultural criticism."
— Rudyard Alcocer

"Race and Nation in Puerto Rican Folklore fills in gaps both in the historiography of Puerto Rican cultural history and in the history of folkloristics in the United States. Necessary and timely issues of race, colonialism, and class as they affected the collecting and editing processes are addressed in detail. Issues of gender inequality and the effects of not including adult women in the collection, are mentioned but not unpacked at the same level."
— Journal of Folklore Research