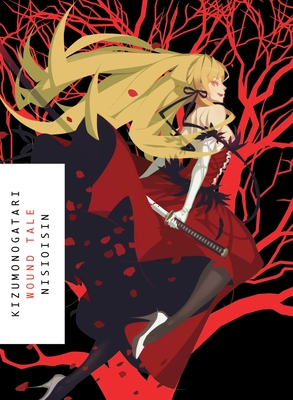 Around midnight, under a lonely street lamp in a provincial town in Japan, lies a white woman, a blonde, alone, robbed of all four limbs, yet undead. Indeed, a rumor's been circulating among the local girls that a vampire has come to their backwater, of all places.
Koyomi Araragi, who prefers to avoid having friends because they'd lower his “intensity as a human," is naturally skeptical. Yet it is to him that the bloodsucking demon, a concept “dated twice over," beckons on the first day of spring break as he makes his way home with a fresh loot of morally compromising periodicals.
Always disarmingly candid, often hilariously playful, and sometimes devastatingly moving, KIZUMONOGATARI: Wound Tale is the perfect gateway into the world of author NISIOISIN, the bestselling young novelist in Japan today. The prequel to BAKEMONOGATARI (“Monster Tale"), this is where the legendary MONOGATARI series, whose anime adaptations have enjoyed international popularity and critical acclaim, begins. A theatrical feature based on KIZUMONOGATARI is due to be released in Japan in January 2016.

There are few authors in Japan who have reached the heights of success as NISIOISIN. Born in 1981, NISIOISIN left of Ritsumeikan University in Kyoto, to pursue a career in story-telling. Initially he had ambitions to be a comic artist, but when he realized his art was not up to snuff, he began to focus on his writing. He would eventually win the 23rd Mephisto Prize, for Kubikiri Cycle (Del Rey), acknowledging his talents as a mystery writer, at the age of 20. Since his debut in 2002 he has penned more than 50 novels and a number of comics.

Nishio's works often cover themes of youth, but are framed in genres that are familiar to the masses. His works tend to mix mystery with comedy and touches or romance and/or the supernatural. He is a modern author in every sense, sometimes even experiementing with the Japanese language itself. Many of his works have been adapted into animated television series and films. His best known works are the Monogatari series and Katanagatari.

“A great prose voice, strong central narrative, and endless thematic echoes make this a rich experience for Monogatari fans and likely a fun one even for newcomers.” – Anime News Network

“Kizumonogatari keeps your eyes glued to the page by intertwining the normal with the paranormal. . . .  For the most part, the English translation of Kizumonogatari does a great job in capturing the tone and style of the original. The characters are still fun, quirky, and just as animated as they were in show supported by strong dialogue.” – Japanator.com