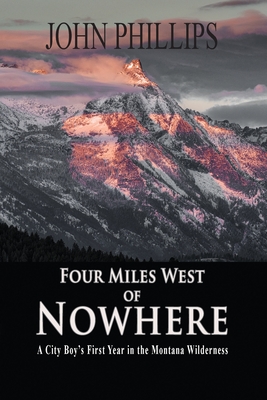 In Four Miles West of Nowhere, John Phillips delivers a Pythonesque travelog of his retirement journey from Ann Arbor, Michigan, to remote Darby, Montana, (population 745, no Starbucks, no traffic light). There, along the Continental Divide, Mother Nature sets out gasp-inducing scenery and also her best birds, bears, and brook trout. To this fauna-rich utopia Phillips adds broken snow plows, a reclusive ex-smuggler, threatening winters, electricity famines, and heartfelt ruminations about fly fishing, guns, survival, Darby's dress code (pre-owned grubby), forest fires, irritating neighbors, helpful neighbors, a voluptuous barber, Republicans (he found one good one), septic tanks, alcohol, and pre-existing conditions. He occasionally claims to dislike his fellow persons, but then delights everyone with eyes and a sense of humor by presenting writing that entertains, informs, and confronts. His wicked wit addresses both human frailties and environmental missteps, but through it all Phillips is wildly funny. He could make you laugh at your own bankruptcy. He made me laugh out loud at his falls into the icy Bitterroot while learning to fly fish. And also at his descriptions of hospitalizations, truck wrecks, tire chains, and acquiring his first Carhartt bib overalls. Phillips has crafted a swift, seamless diary of life at J & J Cat Ranch, the mountaintop home he shares with wife Julie-a willing co-conspirator in all this. The diary's eighty-seven episodes recounting John and Julie's first year as "feeders" (Darbarians who do not hunt) never make you feel voyeuristic. Not once. Hell, to invade their privacy you'd have to stop laughing. -William Jeanes, former editor-in-chief and publisher of Car and Driver and author of The Road to Pickletown