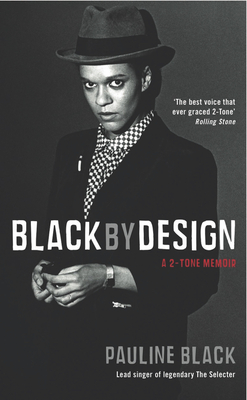 The best voice that ever graced 2-Tone.--Rolling Stone

Lead singer for platinum-selling 2-Tone band The Selecter, Pauline Black has been in the music business for over thirty years. The only woman in a movement dominated by men, she was very much the Queen of British Ska. She saw The Specials, Madness, Dexy's Midnight Runners, and all the other top bands of that generation at their very best . . . and worst.

Black was born in 1953 of Anglo-Jewish/Nigerian parents. Adopted by a white, working class family in the fifties, Pauline was always made to feel different, both by the local community and members of her extended family, who saw her at best as a curiosity, at worst as an embarrassing inconvenience.

Weaving her rise to fame and recollections of the 2-Tone phenomenon with her moving search for her birth parents, Black By Design is a funny and enlightening memoir of music and roots.

Pauline Black is a singer and actress who gained fame as the lead singer of seminal 2-Tone band The Selecter. The band's new album was released in September 2011.

Pauline Black is a singer and actress who gained fame as the lead singer of seminal 2-tone band The Selecter. The band has recently reformed and in September 2011 releases a new album, 'Made in Britain'.