We Must Learn to Sit Together and Talk About a Little Culture: Decolonizing Essays 1967-1984 (Paperback) 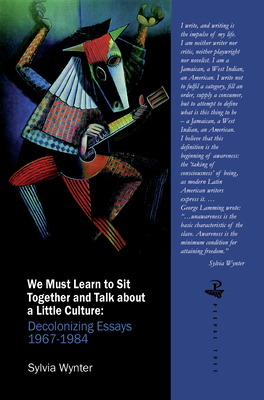 The Event of the anti-colonial struggle which began in the case of a then British Jamaica in the late 1930s, cut across the childhood and early adolescence of Sylvia Wynter, providing the raison d’être of the first phase of her important body of work seen in this collection. The imperative of decolonizing the order of discourse that had legitimated the then imperial order (that is, to the colonizer as well to the colonized), gave rise to a theoretically sustained argument manifest here in a set of seminal critical and historical essays. At the time of their writing, Wynter was a practicing novelist, an innovative playwright, a scholar of Spanish Caribbean history, and an incisive literary critic with a gift for the liveliest kind of polemics. This intellectual virtuosity is evident in these wide-ranging essays that include an exploration of C.L.R. James’s writings on cricket, Bob Marley and the counter-cosmogony of the Rastafari, and the Spanish epoch of Jamaican history (including a pioneering examination of Bernado de Balbuena, epic poet and Abbot of Jamaica 1562-1627).

Across this varied range of topics, a coherent and consistent thread of argument emerges from Wynter’s oeuvre. In the vein of C. L. R. James, she placed the history of Spanish Jamaica (and therefore the Caribbean) in the context of the founding of the post-1492 European settler colonies in the New World, which remained an indispensable element in the first stage of the institutionalization of the Western world system. Therefore, a central imperative of her initial work has always been to reconceptualize the history of the region, and therefore of the modern world, but doing so, from a world-systemic perspective; that is, no longer from the normative perspective of the settler archipelago, but rather more inclusively, from those of the neo-serf (i.e. Indian) and that of ex-slave (i.e. Negro) archipelagos; this latter, as what she defines, adapting Enrique Dussel’s terms, as the "gaze from below" perspective of "the ultimate underside of modernity."

Strongly influenced by Marx together with Black thinkers such as Aimé Césaire, Jean Price-Mars (seen in the Jonkunnu essay), W. E. B. Du Bois and Frantz Fanon, and with an appreciation of the insights brought by the New Studies of the Sixties (including that of Black redemptive co-humanist thought, feminism), Wynter’s work has sought, from its origin, to find a comprehensive explanatory system able to integrate these knowledges, ones born of struggle.

This volume makes an important contribution to restoring to view an essential strand in the 500-year emergent thought generated from the slave/ex-slave archipelago of the Caribbean and the Americas—thought important to what our increasingly integrated world-system, the first such in human history.

Sylvia Wynter is a professor emeritus of Spanish and Portuguese at Stanford University, the author of a series of critical articles published in Jamaica Journal, New World Quarterly, and Savacou, and an active participant in the BBC Caribbean Voices radio program. She is the author of The Hills of Hebron. She lives in Oakland, California.