The Wages of Whiteness: Race and the Making of the American Working Class (Haymarket Series) (Paperback) 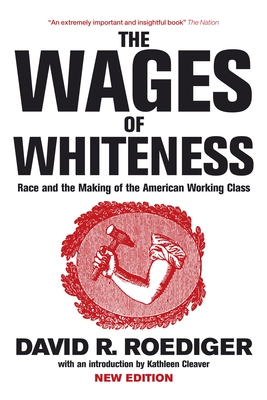 Combining classical Marxism, psychoanalysis, and the new labor history pioneered by E. P. Thompson and Herbert Gutman, David Roediger’s widely acclaimed book provides an original study of the formative years of working-class racism in the United States. This, he argues, cannot be explained simply with reference to economic advantage; rather, white working-class racism is underpinned by a complex series of psychological and ideological mechanisms that reinforce racial stereotypes, and thus help to forge the identities of white workers in opposition to Blacks.

In a new preface, Roediger reflects on the reception, influence, and critical response to The Wages of Whiteness, while Kathleen Cleaver’s insightful introduction hails the importance of a work that has become a classic.

David Roediger is Kendrick Babcock Chair of History at the University of Illinois. Among his books are Our Own Time: A History of American Labor and the Working Day (with Philip S. Foner), How Race Survived US History: From Settlement and Slavery to the Obama Phenomenon, and The Wages of Whiteness: Race and the Making of the American Working Class. He is the editor of Fellow Worker: The Life of Fred Thompson, The North and Slavery and Black on White: Black Writers on What It Means to Be White as well as a new edition of Covington Hall’s Labor Struggles in the Deep South. His articles have appeared in New Left Review, Against the Current, Radical History Review, History Workshop Journal, The Progressive and Tennis.

Mike Davis is the author of several books including Planet of Slums, City of Quartz, Ecology of Fear, Late Victorian Holocausts, and Magical Urbanism. He was recently awarded a MacArthur Fellowship. He lives in Papa’aloa, Hawaii.

Michael Sprinker was Professor of English and Comparative Literature at the State University of New York at Stony Brook. His Imaginary Relations: Aesthetics and Ideology in the History of Historical Materialism and History and Ideology in Proust are also published by Verso. Together with Mike Davis, he founded Verso’s Haymarket Series and guided it until his death in 1999.

“At last an American labor historian realizes that white workers have a racial identity that matters as race matters to workers who are not white.”
—Nell Irwin Painter, Princeton University

“Far and away the best treatment of white working-class racial attitudes in the nineteenth century that I have seen”
—George M. Fredrickson

“An important contribution to our understanding of what has often been called ‘American exceptionalism.’ Sensitive and detailed handling of a wide range of original sources.”
—Louis Kushnick, Race and Class

“Scholarly and thoroughly documented, The Wages of Whiteness is nonetheless a highly readable, compact and compelling narrative. A provocative illumination of the long and tortuous history of racism in the US.”
—Franklin Rosemont, Heartland Journal

“In this penetrating study of the origins of white working-class racial attitudes, Roediger profoundly illuminates the new labor history. A distinctive extension of the scholarly studies that locate the nexus of American society in race and labor.”
—Joseph Boskin, Choice

“Interesting and useful. Reconstructs how labor in America made racism part of its very being.”
—John DeBrizzi, Telos

“A real contribution to the study of the dynamic relationship that exists between the variables of race and class. A very engaging and compelling book. Wages of Whiteness will have a broad appeal to students and researchers across a wide array of disciplines.”
—Lisa Reilly and Cameron McCarthy, European Journal of Intercultural Studies

“A significant contribution, particularly necessary for those who want to see the struggle for labor unity across racial lines move forward.”
—Paul Mishler, Science and Society

“Roediger’s lasting contribution ensures that the history of race and class can no longer be written from the perspective of romantic working class heroes, nor can it be written in a spirit of self-righteous ‘anger.’”
—Barry Goldberg, New Politics

“In The Wages of Whiteness David Roediger takes a courageous look at the development of white working-class racism and attempts to unravel its complex skein of economic, cultural, and psycho-political issues.”
—Soledad Santiago, Foundation News

“Of great originality and yet firmly grounded in a rich and diverse scholarship. There is no denying the enormous achievement of this book. Henceforth there will be no evading the question of racism in our contemplation of working-class formation in America.”
—David Brody, Journal of Interdisciplinary History

“Offers a compelling understanding of working-class racism. A rich and detailed history that traces notions of whiteness from the early seventeenth century to the late nineteenth.”
—Rhonda Levine, Contemporary Sociology

“Much has been written about the sources of racism and the wellsprings of racial conflict but few historians have shown David Roediger’s sensitivity to the process by which race figured in defining the very nature of American society. The author’s most important contribution is to elucidate how racial identity was critical to the formation of the working class during the nineteenth century. Roediger’s central argument is most compelling.”
—Ronald Mendel, Labour History Review

“David Roediger’s fascinating and vital study will satisfy even the most jaded intellectual palate and deserves the widest circulation.”
—Martin Crawford, History

“The book speaks so clearly to what historians know about the American working class, but with enormous originality. Broadly accessible to a wide audience, it connects the histories of slave labor and free labor thus providing a more profound understanding of American working class formation. Theoretically sophisticated, pulling together subtle but significant connections among race, class and gender. Blindingly revealing and of lasting scholarly value.”
—Organization of American Historians Prize Committee, 1992 Merle Curti Prize

“A timely and important intervention in the current debates over ‘race’ and ethnicity.”
—Catherine Hall, New Left Review

“Roediger’s exciting new book makes us understand what it means to see oneself as white in a new way. An extremely important and insightful book.”
—Lawrence Glickman, The Nation