The New Way Of The World: On Neoliberal Society (Hardcover) 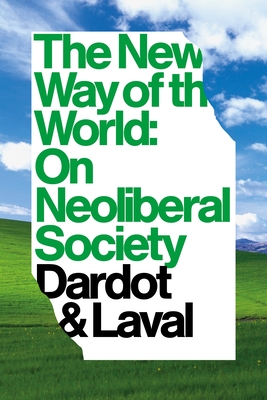 What is new about neoliberalism? Pierre Dardot and Christian Laval contend that it is more than just a new economic paradigm — it is a system for transforming the human subject. Rather than a return to classic liberalism, or the restoration of a ‘pure’, unconstrained market, neoliberalism envisages the modern corporation as a model for government, conjuring a future in which society is nothing other than a web of market-based relations.

Cutting through contemporary misunderstandings about its genesis and prevalence, Dardot and Laval distil neoliberalism to its core meaning and examine how it might be challenged on new political and intellectual terms.

Gregory Elliott is a member of the editorial collective of Radical Philosophy and author of Althusser: The Detour of Theory and Labourism and the English Genius: The Strange Decay of Labour England? Elliott has also translated numerous books including The New Spirit of Capitalism, Non-Violence: A History Beyond the Myth, and The New Way of the World: On Neoliberal Society.

“The New Way of the World is the best modern realization of Foucault’s pioneering approach to the history of neoliberalism. It wonderfully explores the European roots and branches of the neoliberal thought collective over the twentieth century, and warns that unthinking misrepresentations of its political project as espousing ‘laissez-faire’ has had the effect of allowing the Left to submit to its siren song.”
—Philip Mirowski, author of Never Let a Serious Crisis Go to Waste

“Extremely scholarly, this book is an insistent invitation to push theoretical and social critique of the present order beyond the standard analyses.”
—Le Monde diplomatique

“To understand these debates [on neoliberalism], the book by Christian Laval and Pierre Dardot on the ‘neoliberal society’ offers us analytical keys. This monument of scholarship draws on the history of ideas, philosophy and sociology.”
—Le Monde

“A compelling analysis of neoliberal governmentally in the era of capitalist financialization.”
—Theory, Culture & Society