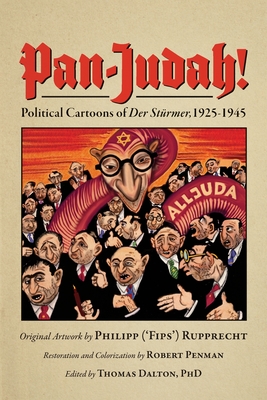 Beginning in the 1920s, a man named Julius Streicher published a small weekly German newspaper called Der St rmer. Its mission was straightforward: to warn the German people about the threats posed by foreign and domestic Jews. The dangers were very real, and Streicher's stories gave a blunt and direct account of them.

A key feature of Der St rmer was its political cartoons. The cover of every issue, and several interior pages, displayed cartoons depicting various Jewish dangers, in a most striking and graphic form. The lead cartoonist was a man named 'Fips' Rupprecht. His cartoons became the signature feature of the newspaper, and grew to represent the broader German struggle against Jewry.

With the demise of National Socialist Germany, Der St rmer and Fips' cartoons were largely forgotten. Or rather, they were buried-the victorious nations certainly did not want old Nazi images floating around, raising difficult questions and making people think.

Recently, though, a skilled digital artist named Robert Penman rediscovered the forgotten images. He carefully restored, colorized, and reissued them. Here, for the first time, he has compiled 200 of the best Fips images, as they have never been seen before.

Penman has done a masterful job. The images are sharp, crisp, and compelling. The colors are stunningly vivid. The effect is truly astonishing. Fips' cartoons, originally printed on cheap newsprint, come alive for the first time. Every image is a small masterpiece, a true work of contemporary art. And one each tells a story-a story with relevance for the present day.

Organized into six chapters chronologically, Fips' cartoons clearly demonstrate the progression of views over the period of 20 years, from before the Nazis assumed power until the very end of the war. They tell the story of Germany's rise and fall as nothing else can.