Ivermectin for the World (Paperback) 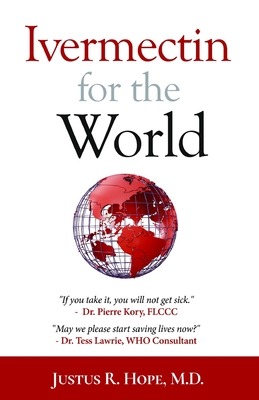 On May 1, 2021, the Ebook, the first edition of Ivermectin for the World, was released as a call to action for the use of Ivermectin to end the humanitarian crisis in India with the COVID-19 Pandemic. Cases had surged to 414,000 per day, and deaths exceeded 4,000 per day. There was no end in sight - until the country adopted Ivermectin. As a direct result of the use of Ivermectin, cases and deaths in India dropped immediately, and the crisis in India was averted. The second edition of the book, Ivermectin for the World, documented these results in real time, through articles and reports using data and graphs from the Johns Hopkins University Center for Systems Science and Engineering, the JHU CSSE.

Following this, it became nearly impossible to deny the effectiveness of Ivermectin. A natural experiment in India developed, where one state, Tamil Nadu, outlawed Ivermectin, while others, including Goa, Uttarakhand, and Uttar Pradesh embraced it, and the divergence in cases and deaths left no doubt about Ivermectin's effectiveness, indeed at greater magnitudes than the vaccine.

This book provides the history, the science, and the experience of India in quelling their COVID-19 crisis with Ivermectin. We have released this second edition and paperback version of Ivermectin for the World with another call to action, this time for Indonesia to use Ivermectin to help with their humanitarian crisis which mirrors India's recent situation.

Ivermectin for the World, and its author, join with the British Ivermectin Development Panel, the Evidenced-Based Medical Consultancy and the FLCCC in calling for the immediate and widespread use of Ivermectin in Indonesia to end their crisis, just as India so successfully did. We call for the world to adopt Ivermectin, not instead of the vaccines, but in addition to them.

The hope is that the world and the public can break through the censorship and misinformation about this safe drug, and see the truth contained in this anthology of the Pandemic and learn from its use in India, Slovakia, and Mexico, where those countries conquered COVID-19 within weeks of adopting Ivermectin.