Look for Me in the Whirlwind: From the Panther 21 to 21st-Century Revolutions (Paperback) 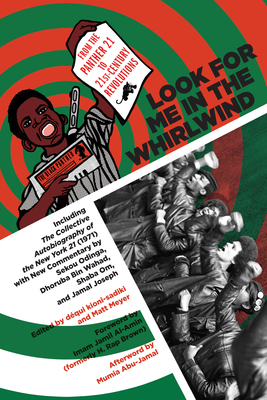 In 1969, 21 members of the militant New York branch of the Black Panther Party were rounded up and indicted on multiple charges of violent acts and conspiracies. The membership of the NY 21, which includes the mother of Tupac Shakur, is largely forgotten and unknown. Their legacy, however—reflected upon here in this special edition—provides essential truths which have remained largely hidden.

Mumia Abu-Jamal is probably the best-known political prisoner in the Western world and author of Live from Death Row. Imam Jamil Al-Amin, also known as H. Rap Brown, is known for his autobiography, Die Nigger Die!. Living in both Ghana and the U.S., Dhoruba Bin Wahad writes and promotes Pan Africanism. Jamal Joseph is a writer, director, producer, poet, activist, and educator. déqui kioni-sadiki is a radio producer, and educator. Matt Meyer is an NYC–based educator, organizer and author. Sekou Odinga was a founding member of the New York chapter of the Black Panther Party.

“Listen to these voices of young men and women who poured their insights, courage, and creative energy into New York City’s fledgling Black Panther Party that generated chapters in all five boroughs. Unlike out west, where police shot and killed Panthers to disrupt the revolutionary group, New York relied more heavily on courts, jails, and prison to sabotage the organization. This reprint edition allows a new generation to hear these amazing stories, and additionally, to read the authors’ reflections and insights for today.” —Kathleen Cleaver, Black Panther Party Communications Secretary (1967 1971); Senior Lecturer, Emory University School of Law

“Look for Me in the Whirlwind could not come at a timelier moment in history. As newly-emerging grassroots movements challenge state violence against Black people in the U.S., it is essential that new generations learn anew, and that older ones are reminded, of police and FBI tools of repression deployed to demobilize Black radical activism and its growing influence on the Black working class in the ’60s. These remembrances, by those framed in the NY Panther 21 case, are vital building blocks for reconstructing the history of one of the least understood chapters of the Black Panther Party. They are also indispensable reading for those seeking to understand how individual activists and their movements were able to hold their center in the face of harrowing government repression.” —Johanna Fernandez, Professor of History, Baruch College Department of Black and Latino Studies, City University of New York; co-curator, ¡Presente! The Young Lords in New York

"This book demonstrates the scope of the Panthers’ intellectual gifts as well as the compassion and revolutionary spirit at the center of their radical grassroots activism." —Publishers Weekly

"Its very existence is a reminder of the Black Panther Party’s continued relevance in a world where white supremacists still control much more than just the conversation." —Ron Jacobs, counterpunch.org

"Look for Me in the Whirlwind remains essential reading for anyone seeking to understand both the Black Panthers in all their complexities, as well as the emerging politics of the Black Liberation Army." —Keith Riley, Maximum RocknRoll