The Why Axis: Hidden Motives and the Undiscovered Economics of Everyday Life (Compact Disc) 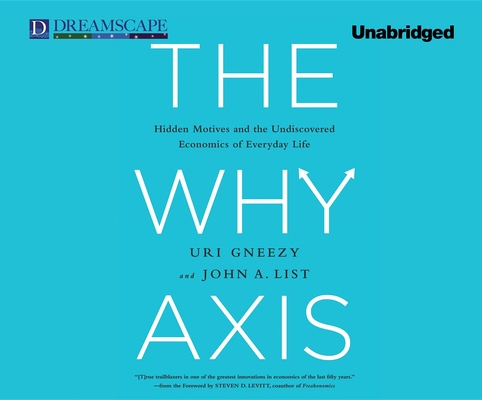 Uri Gneezy and John List are like the anthropologists who spend months in the field studying the people in their native habitats. But in their case they embed themselves in our messy world to try and solve big, difficult problems, such as the gap between rich and poor students and the violence plaguing inner city schools; the real reasons people discriminate; whether women are really less competitive than men; and how to correctly price products and services. Their field experiments show how economic incentives can change outcomes. Their results will change the way we both think about and take action on big and little problems, and force us to rely no longer on assumptions, but upon the evidence of what really works.

Uri Gneezy is the Arthur Brody Endowed Chair in Behavioral Economics and professor of economics and strategy at the Rady School of Management at UC San Diego. He has also been on the faculties of the University of Chicago, Israel's Technion, and the University of Haifa. John List is the Homer J. Livingston Professor of Economics at the University of Chicago. He has been a research associate at the National Bureau of Economics (NBER) for more than decade and served as senior economist on the President's Council of Economic Advisors for environmental and resource economics. READER BIO Eric is an Earphones Award-winner for his narration of ""Detroit: An American Autopsy."" He has narrated over a dozen audiobooks in both fiction and nonfiction. Eric is also the host and producer of the award-winning ""This American Wife,"" a popular podcast and now webseries that features original comedy and stories, as well as interviews with authors such as Robert Greene, and Amy Tan. He also works as a theatrical producer, and is based in Los Angeles.