When She Woke (CD-Audio) 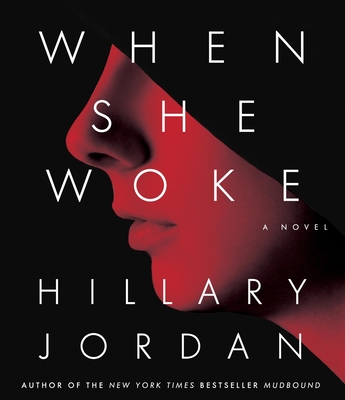 “Inspired by The Scarlet Letter, this is a stunning, suspenseful, and scary look at what happens to Hannah Payne when she is arrested and convicted of having an abortion in a futuristic America. Her punishment is to become a 'chrome,' a criminal whose skin color is genetically altered to reflect her crime. Hannah becomes a Red for the crime of murder, and she further complicates her situation by refusing to name the father of her unborn child. Once chromed, she is released and must survive as best she can. Her navigation through the perils of a hostile society launches Hannah on a journey of self-discovery and makes readers question the consequences of politicizing the personal. Jordan's characters are compelling and her pacing is flawless; I couldn't put this book down!”
— Erica Caldwell, Present Tense, Batavia, NY

Hannah Payne awakens to a nightmare. She is lying on a table in a bare room, covered only by a paper gown, with cameras broadcasting her every move to millions at home. She is now a convicted criminal, and her skin color has been genetically altered. Her crime, according to the State of Texas: the murder of her unborn child, whose father she refuses to name. Her color: red. The color of newly shed blood.

In Hannah’s America, sometime in the future, faith, love, and sexuality have fallen prey to politics. Convicted felons are no longer imprisoned and rehabilitated, but “chromed,” forced to appear in a new and sinister form of reality TV, and released back into the population. Stigmatized in a hostile world, they must survive the best they can.

Until her arrest, Hannah had devoted her life to church and family. In seeking a path to safety, she is forced to question the values she once held true and the righteousness of a country that politicizes the personal.

Hillary Jordan is the author of the novels Mudbound (2008) and When She Woke (2011), as well as the digital short “Aftermirth.”

Mudbound won the 2006 Bellwether Prize, founded by Barbara Kingsolver to recognize socially conscious fiction, and a 2009 Alex Award from the American Library Association. It was the 2008 NAIBA Fiction Book of the Year and was long-listed for the 2010 International IMPAC Dublin Literary Award. Paste magazine named it one of the Top Ten Debut Novels of the Decade. Mudbound has been translated into French, Italian, Serbian, Swedish, and Norwegian, and the film version is forthcoming in fall 2017.

When She Woke was long-listed for the 2013 International IMPAC Dublin Literary Award and was a 2012 Lambda Literary Award finalist. It has been translated into French, German, Spanish, Turkish, Brazilian Portuguese, and Chinese complex characters.

Jordan has a BA from Wellesley College and an MFA in Creative Writing from Columbia University. She grew up in Dallas, Texas, and Muskogee, Oklahoma, and currently lives in Brooklyn, New York.

“Corrigan’s narration becomes one with the plot.”
—AudioFile

“It reads like a thriller, and one that makes you think hard, to boot. I’ve already placed this one on my favorite-books-for-book-clubs list.”
—BookPage

“Corrigan’s voice slowly matures as Hannah escapes and grows stronger and more self-reliant in a story that champions the empowerment of women.”
—Booklist